Issue: Retired pay and active duty pay increases are different in most years because they are based on different compensation principles.

Background: Retired pay increases are made each year to maintain the same retired pay purchasing power each member had at retirement. This is accomplished through annual Cost of Living Adjustments (COLAs), which are based on the Bureau of Labor Statistics' (BLS) Consumer Price Index (CPI) -- the measure of inflation. The CPI is also used to adjust annuities for other federal retirees, survivors, and social security recipients.

Price inflation (CPI) and private sector wage growth (ECI) are rarely equal for any given year, and this can lead to a disparity in the annual adjustments to retired pay versus active duty pay. For most years from the mid-1970s through the, mid-90s, COLAs were higher than active duty pay raises, primarily because active duty pay raises were being regularly capped below the ECI. The track record for keeping annual retired pay COLAs up with the CPI was much better, but not perfect. No COLA was paid in 1985, and COLA payments were delayed three months each year for 1994-1996. In the late 1990's, chronic retention problems (caused by years of capping active duty pay) led Congress to authorize healthy active duty pay raises, which were larger than COLAs from 1997-2005. More recently, the retiree COLA has exceeded the pay raise percentage in three of the past four years. 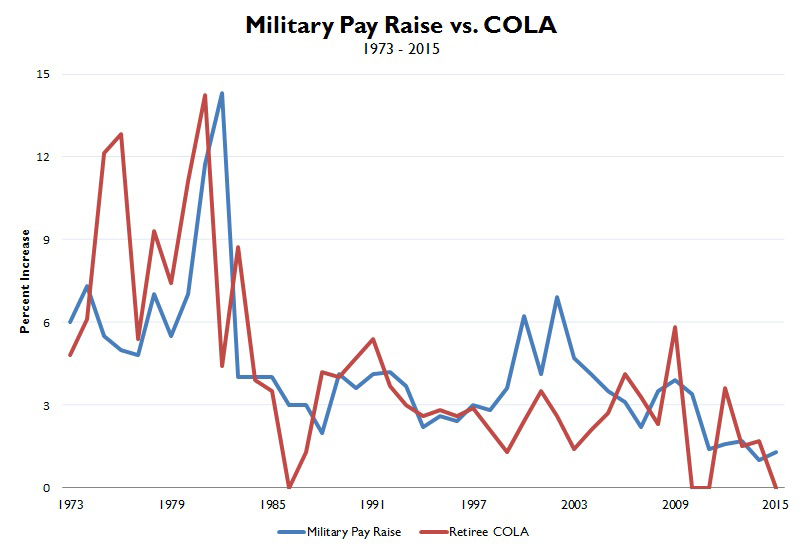 In past years when active duty raises were larger, some retirees asked why retired pay can't be updated each year based on current active duty pay tables, which was the practice before 1958.

One of the reasons Congress shifted to CPI-based COLAs in 1963 was the lack of active duty pay raises between 1958 and 1963. MOAA supported a lawsuit in the early 70's to return to the active duty standard. This lawsuit went to the Supreme Court and lost. Retirees ended up benefiting from the switch to CPI COLAs, since inflation accelerated dramatically a few years later, yielding COLAs much higher than active duty raises. Today, returning to the active duty standard would actually cut pay for many retirees.

MOAA Position: After more than 40 years of basing COLAs and pay raises on different standards, there is no political support to link retired pay adjustments to active duty pay levels. Active duty raises are paid to sustain retention, and there's no retention issue once a member leaves active duty. MOAA vigilantly monitors annual retired pay COLAs and will strongly oppose any attempts to cap these adjustments below inflation.

Key Bills/Status: No bills have been introduced in the 114th Congress, but the several studies have recommended adopting a "chained COLA" that would depress the current COLA as a means of reducing long-term costs and would have a huge impact on the value of retired pay over the long term. Most recently, adoption of a "chained COLA" was being proposed to help avert the Fiscal Cliff. MOAA will remain vigilant to fend off any proposals that will devalue earned retired pay.