Welcome to MOAA’s COLA Watch page, where you’ll find a monthly update on the inflation figures used to set the cost-of-living adjustment (COLA) for payments received by military retirees, disabled veterans, Social Security beneficiaries, and many others receiving federal compensation.

The CPI-W figures from the end of this fiscal year (July, August, and September 2023) will be compared to the FY 2023 COLA baseline to calculate the 2024 COLA (see "How Your COLA Is Calculated," below).

The next CPI-W figures will be released Dec. 13.

Why does MOAA track the monthly CPI-W release? Protecting the value of service-earned benefits has long been a pillar of MOAA’s advocacy. MOAA has led previous efforts to rebuff budget plans seeking to reduce or eliminate COLA for military retirees, many of which have taken root shortly after large increases.

The nature of a higher COLA is to preserve purchasing power for retirees, VA beneficiaries, and surviving spouses – not to fund other government programs. 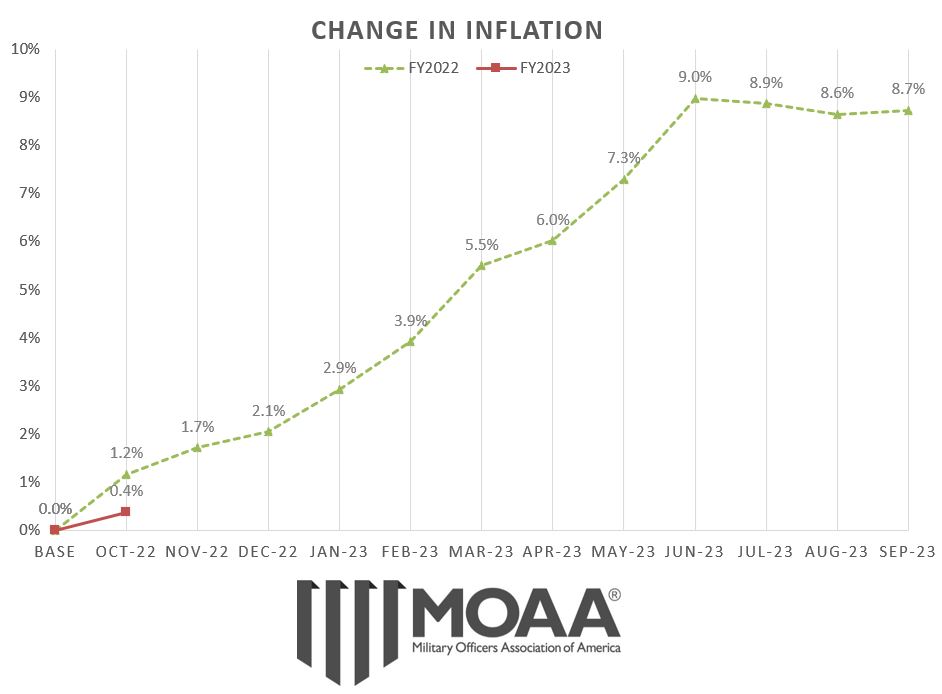 The FY 2023 COLA baseline of 291.901, compared with the FY 2022 baseline of 268.421, results in the above percentage increase. This baseline is determined by averaging the monthly CPI-W for the final three months of the fiscal year (July, August, September).

The Math: How Your COLA Is Calculated

The yearly cost-of-living adjustment is made by comparing the average CPI-W from monthly reports in July, August, and September of the current fiscal year to the average for the same months of the year prior. MOAA also provides a regular calculation for the monthly COLA change: (Monthly CPI-Yearly baseline CPI)/Yearly baseline CPI.

The Latest From MOAA

Join the fight to protect your pay and benefits.