Former Navy SEAL Jared Shaw has come a long way from his days as a self-described “turd” that stirred up trouble in his West Texas high school.

Shaw served from 2002 to 2013, leaving the Navy as a petty officer first class. While still in uniform, Shaw whipped Hollywood superstar Chris Pratt into shape for his role in the 2012 movie Zero Dark Thirty, which chronicled the hunt for Osama bin Laden. 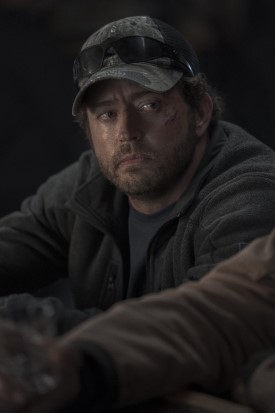 Since then, Shaw has been getting his feet wet in Hollywood with stunt and small acting roles. This summer, he is starring as Pratt’s on-screen best friend, Ernest “Boozer” Vickers (pictured) in the new Prime Video drama The Terminal List, about a Navy SEAL who has to come to grips with the loss of his entire team.

MOAA recently chatted with Shaw about the many roles he has played on the set of the show, including co-producer, and what it takes to be a Navy SEAL.

Q. Why did you decide to become a Navy SEAL?

A. I knew I was I going to be a SEAL at the age of 16. I was a rowdy, mischievous kid who didn’t like school. It was hard for me to sit still. I went down to see a Navy recruiter … and I started looking at the pamphlets and one of them shows a SEAL coming out of the water, and I thought I had what it took. I go back to my computer class, tell my buddy. And my computer class teacher said you will never be a Navy SEAL, but [my friend] could. I just knew something he didn’t know.

[After high school], I went to a small college to run track and I hated it. I quit the track team, started training in MMA. I ended up with a concussion, I couldn’t take the hits to the head. So I went into the Navy in 2002 and made it through.

Q. How long did you serve as a Navy SEAL?

A. I was in almost 11 years total, two of which I spent training. I did four combat deployments as a sniper and a breacher. A lot of guys saw more action than I did, but I saw my fair share. The second deployment to Fallujah was the roughest one.

Q. How did you end up getting into the movie business?

A. I always loved acting. In high school, I would do the one-act plays. I loved it until I got kicked out my sophomore year. … I took acting classes before I got out of the military. I was stationed at Coronado and I drove to L.A. once a week for acting classes. Chris [Pratt] was working on Jurassic World, and I worked with them on stunts, and that is how I got my foot in the door.

Q. Combat losses are a reality of life in the SEAL community. How were you able to convey the bond that SEAL team members have to Chris and the rest of the nonmilitary cast?

A. With Chris, we worked on Zero Dark Thirty together. We had 10 years of friendship and a relationship, so Chris had an inside look at the world I come from. He had been building up his skill set, but this role was the most in depth he had. Aside from producing and doing technical advising, I was able to bring in Ray Mendoza, who was also a SEAL. He is the lead technical advisor for a company called War Office Productions. He is the best in the business. He took the ball and ran with it.

Q. What technical aspects of being a SEAL did you help with the most while on the set?

A. I have a sniper background and … I actually helped write some of the sniper scenes. I would step in and show the proper body position, how you looked through the glass [scope]. [Lead technical adviser] Ray [Mendoza] was spread so thin sometimes that if I wasn’t acting, I was technically advising on other things. It was really cool wearing multiple hats. Because the team was a small group, everybody had to do everybody else’s job.

As a SEAL, you may have some specialty in something but not everybody is a sniper. But everybody gets a basic understanding of explosives work. So we were just tying that into a movie set. [As SEALs], it is ingrained in us to look for a job and help out wherever we can.

[RELATED: ‘Top Gun: Maverick’ Puts Audience Back in the Cockpit … for Real]

Q. What would you say is the best preparation for a young person who is thinking about becoming a Navy SEAL?

A. I believe that job is a calling. By that I mean that I felt that draw. I knew it and I felt it. … I talked to my mom before I went into Hell Week and said, “I don’t know if I will make it through, but I know I won’t quit.” … Like anything else, you have to prepare adequately, you have to be disciplined and regimented and motivated and be willing to do sucky things. SEAL training is a very proven filter to remove people who don’t want to do it.

Q. If you could boil your leadership philosophy into something that would fit on the back of a business card, what would that be?

A. You have to truly lead by example. I had an instructor when I was going through training that I admired and really respected, and it was the way he carried himself most of the time. He put himself out there with his physical conditioning, setting that example. When I became a SEAL instructor, I stopped drinking, ate right. I wanted to make sure to hold to that standard.

Q. You are in post-production for a new movie called Civil War with [actress] Kirsten Dunst. Can you tell me anything about your character?

A. I don’t know if I am allowed to give anything away on this, but it’s another military-type role. It is a pretty physical role, shoot-and-move-type stuff.