(This article by film commentator Todd Gilchrist originally appeared in the May 2022 issue of Military Officer, a magazine available to all MOAA Premium and Life members. Learn more about the magazine here; learn more about joining MOAA here.)

Top Gun was an historic film for the military even more than it was for Tom Cruise or the entertainment industry. Not only was it made in a unique collaboration with the U.S. Navy, which granted the production access to an aircraft carrier, several aircraft, multiple official locations, and some of its best pilots, but recruitment for naval aviators increased by an estimated 500% after its release in May 1986.

Now, 36 years later, the Navy, Cruise, and his collaborators hope to capture lightning in a cockpit once again with Top Gun: Maverick, a sequel that updates the story of rule-breaking pilot Pete “Maverick” Mitchell while offering a next-generation look at the Top Gun program as it evolved both in the wake of the fictional character’s accomplishments and the film’s real-life impact as one of the biggest hits of the 1980s. The new film is due out on May 27.

Despite many efforts by Cruise and original Top Gun producer Jerry Bruckheimer to develop a sequel over the intervening decades, it was one of the movie star’s more recent collaborators, Oblivion writer, director, and producer Joe Kosinski, who cracked the creative block that kept the project from getting off the ground.

“The most important thing to preserve was centering the story around Maverick as a character,” Kosinski, the sequel’s director, told Military Officer. “His relationship with Goose and the romance with Charlotte was what makes that film really stick with people, those relationships, so for me it was about trying to tell the next part of Maverick’s story.”

With the support of Bruckheimer, Kosinski sold his star and fellow producer Cruise on a concept that would not only tell a great story but offer the stunt-loving actor an opportunity to do something on screen that the first film didn’t: put him and all of his co-stars in the planes to perform aerial maneuvers for real.

“The goal was to get everyone in the airplane so that nearly everything you see on screen is authentic,” Kosinski said.

When Bruckheimer and Cruise made the first film, they faced an uphill battle with military leaders who were perhaps understandably concerned about how a Hollywood production might dramatize one of their elite training facilities.

“It took the secretary of the Navy to come in and say, ‘I know this is gonna be good for us,’” Bruckheimer recalled.

But following Top Gun’s success commercially and especially as a recruiting tool, the Navy not only gave the filmmakers more latitude to tell the story that they wanted to about Maverick, but provided the production with a team of advisers led by Capt. Brian Ferguson, USNR, a pilot who says he enlisted because of the first film.

“All of my buddies will laugh at me, but I’m here because I watched that movie,” confessed Ferguson. “And that’s the first thing I said when I met Tom.” 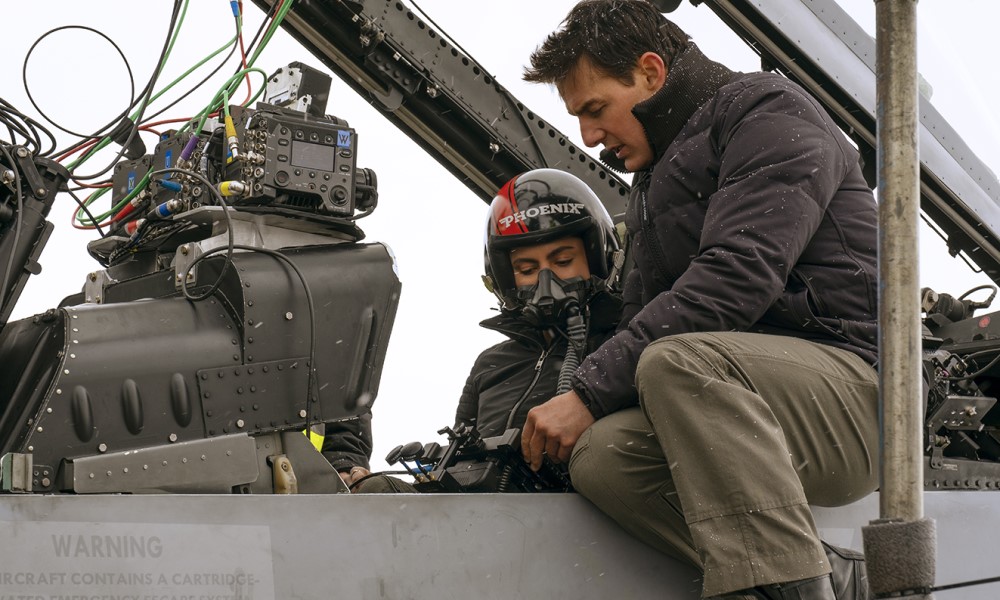 Monica Barbaro, who plays as "Phoenix" in "Top Gun: Maverick," talks with Tom Cruise on the film set. (Photo courtesy of Paramount Pictures)

Kosinski worked closely with naval leaders to design the training sequences, and eventually, the missions that were depicted in the film.

“That was a lot of fun, to ask them to help me come up with a mission that would be the most difficult and harrowing that you could ever imagine being sent on, and then figure out a way to depict that in a film,” the director said.

But if the finished film was meant to portray the best of the Navy’s best, Ferguson said he insisted early on that the best way to do that was by selecting pilots randomly pulled from the program’s ranks.

“We didn’t cherry-pick people off the flight line,” Ferguson explained. “We weren’t using the Blue Angels or the [commanding officer] of Top Gun for every scene. We were using regular lieutenants.”

The only member of the cast with even close to as much experience as the naval aviators was Cruise, who is a licensed pilot and practiced in aerobatics, which meant his co-stars would need to go through a boot camp to prepare for the rigors of maneuvering through the air at speeds of several hundred knots.

“We came up with a syllabus, and we got them in a little plane, and a bigger plane, then a jet, so when they were good there, they were good for the movie,” Ferguson said.

“We really wrung them out, supersonic up high, down low, seven G-forces,” he added cheerfully. “But in the end you see in the movie they were all spectacularly equipped to handle what really is the most extreme physiological thing your body can go through — fighter aviation.” 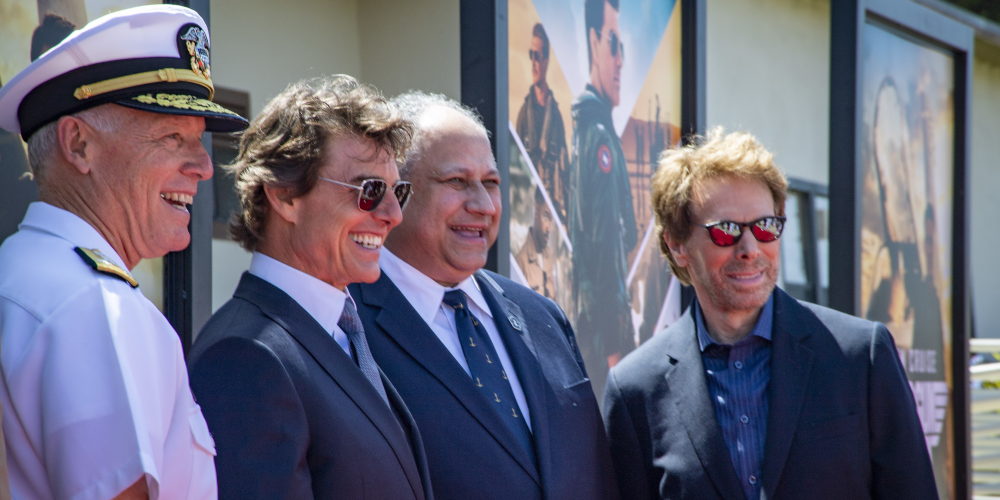 As an actor whose commitment to verisimilitude has led him to climb one of the world’s tallest buildings from the outside and dangle on the hull of a military cargo plane while it’s in mid-air, Cruise unsurprisingly worked harder than anyone to match the same physical demands endured by his real counterparts.

“Tom always would say, ‘I need to do all this at seven and a half G’s,’ which is the limit of the airplane,” Ferguson said. “And he did that every single time — and he’d come back smiling.”

It’s an impulse shared by Kosinski, whose experiences on CGI-heavy films like TRON: Legacy taught him the value of capturing action on camera in real time.

“The audience can feel when something’s done for real,” the director said. “And certainly when it comes to something very dynamic like flying in a fighter jet — the forces on your body, the way the sunlight moves around the cockpit — those are things that would be almost impossible to create on a stage.”

But ultimately, Bruckheimer said it was the Navy’s openness and ongoing collaboration with the production at all levels of service that made all of those goals achievable in Top Gun: Maverick.

“We were very thankful that the Navy allowed us to come back,” he said. “I can’t say enough about how terrific they were to work with, all the way down from the admirals to the guys who were on the deck launching those planes.”

“They really were the best of the best.”