“I got so hooked on their stories,” she said. “Each one had a story, and they were always so humble about their experiences.” 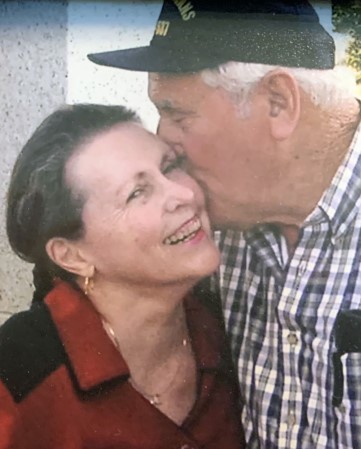 The list of veterans she has interviewed includes some well-known names: Cpl. Frank Buckles, USA, who was the last surviving World War I veteran; Col. Richard Cole, USAF, who served as the co-pilot to Lt. Col. Jimmy Doolittle during the Doolittle Raid; George Mendonsa, the “kissing sailor” in the famous V-J Day photo from Times Square (pictured with Redmond); and Army veteran Indiana Hunt-Martin, a member of the 6888th Central Postal Battalion, which was the only African-American Women’s Army Corps unit to serve in Europe during World War II.

She also interviewed her husband, Lt. Col. Robert A. Redmond, USA (Ret), a graduate of the U.S. Military Academy at West Point, N.Y., who went on to serve a 20-year career in the Army. The two met in 1970 while he was teaching at West Point. They had been married for 33 years when he died in 2007 of cancer from Agent Orange exposure in Vietnam.

Redmond does an audio recording of every interview, which she uses to create a transcript for the Veterans History Project. She gives a copy of the interview to the family of each veteran.

“Families are delighted,” she said. “It’s family history they might not have heard otherwise.”

She also has shared many of the interviews in her book, Words from the Heart: When America's Veterans Speak [Outskirts Press, 2011].

Redmond said she hopes the book will help teach more Americans about the military and the sacrifices servicemembers and their families make.

“It’s wonderful to be able to pick up a book and read these stories. … It’s a good way to understand what the military does and why we live in a free country,” she said.

Redmond is also involved in numerous other veteran-related causes, including Wreaths Across America, Daughters of the American Revolution, and MOAA’s Upper Potomac (Md.) Chapter and Surviving Spouse Virtual Chapter.

At age 80, she plans to continue to interviewing veterans. “It’s been such an honor,” she said. “And there are still a lot of veterans with stories to tell.”

Col. Ron Sarg, USAF (Ret), president of the Delaware Council of Chapters, grew his hair for 22 months so he could donate the required 10 inches to Locks of Love.

CW4 Edwina “Eddy” Mroz, USCGR (Ret), was one of 93 women veterans flown to Washington, D.C., to visit the war memorials.