Lt. Col. John Culp, USA (Ret), walks the streets of Kyiv wearing body armor and looking for unexploded ordnance left behind from Russian assaults on the city. He picks up and moves shells and removes fuses, working alongside bomb technicians from the explosive ordnance disposal (EOD) team of the National Police of Ukraine.

When Culp arrived in Ukraine in early April, he expected to initially assist from behind the scenes, but he was prepared to put his EOD background to use. After all, that background is what brought him the more than 5,000 miles away from home to a war zone. The retired special forces officer and EOD tech is volunteering with the organization Bomb Techs Without Borders (BTWOB), a 501(c)(3) founded in 2018 “to prevent casualties caused by landmines, IEDs, and other explosive remnants of war.”

“Can you imagine being shelled day and night and probably 20% of the ordnance not exploding?” Culp said. “That’s exactly the situation they have here [in Ukraine].”

Culp, a member of MOAA’s Western North Carolina Chapter, connected with BTWOB after realizing he wanted to do something to help.

“I was watching a video of some guys dismantle a bomb by hand, and I suddenly had this aha moment,” he said. “I said, ‘I can add to that.’ I’m probably not a great asset on the infantry battlefield. When you weigh me down with armor and weapons and a helmet … I probably wouldn’t last. I’m in pretty good shape … for 69 years old, but let’s be realistic.”

His background, however, was something he thought could make a difference. Prior to receiving his commission in 1978 and serving a career primarily in special forces, Culp served as an EOD tech. He completed additional EOD training before serving as a missile and biological and chemical weapons inspector with the United Nations Special Commission in Iraq. After retiring from the Army, he worked in the explosives program for a federal agency for 15 years, during which he trained foreign EOD units.

“That was really where I thought I could add something to the mix here,” Culp said. “Because, although my technical expertise in terms of modern EOD tools and things are not as current … I have something that not everybody else has, which is a lot of experience working for foreign EOD teams on their turf, trying to get them to work together, and trying to move their level of expertise up.”

As BTWOB country coordinator in Ukraine, Culp is working with a colleague to set up EOD training in the country by the end of May to teach three categories: identification and flagging of ordnance, EOD technicians, and EOD supervisors.

“[The National Police] have a very strong EOD structure, but they don’t have enough [manpower],” he said. “[The training] will allow them to expand rapidly once they have some more personnel.”

To accomplish this, funding is key. It will allow for more EOD technicians to travel to Ukraine to assist as well as replenish the supply of needed tools, which Culp says are being used rapidly for safing and destroying ordinance. 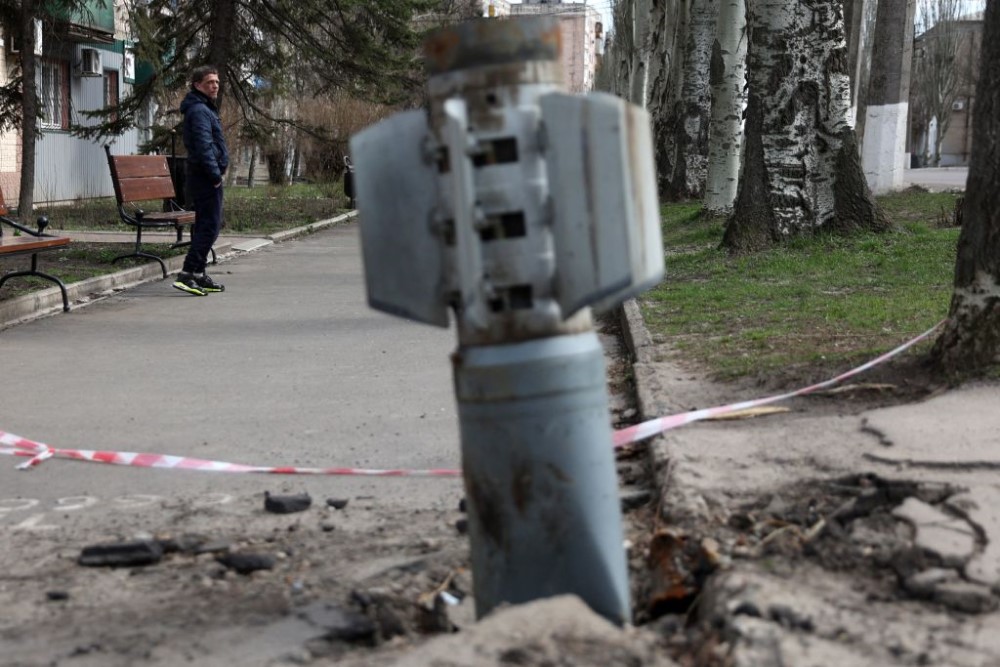 A man walks past an unexploded tail section of a 300mm rocket which appears to contained cluster bombs launched from a BM-30 Smerch multiple rocket launcher after shelling in Lysychansk, Ukraine, on April 11. (Photo by Anatolii Stepanov/AFP via Getty Images)

Support on the Homefront

Back home in North Carolina, Culp has the support of his family and friends, including his wife, Donna, a former Air Force captain who serves as president of the Western North Carolina Chapter of MOAA.

Donna is raising funds to support BTWOB, and the chapter recently held a fundraiser for the Moldova World Children’s Fund, which was formed by a member of the chapter 20 years ago and has diverted all its efforts to supporting Ukrainian refugees.

"I'm proud of John for following his conviction to ‘do something’ to help the people of Ukraine,” Donna said. “From the moment I realized he was serious about volunteering with Bomb Techs Without Borders and was ready to go to Ukraine, I pushed aside any selfish feelings I had, and we set about getting him ready to go. Knowing what skills he brings to the table as a bomb tech and understanding bomb techs ultimate mission is that of disarming all manner of threatening ordnance, I was ready to support him. He's that kind of guy. John, like all bomb techs, possess a set of skills that is an art and a science and, particularly in this case, is humanitarian to the core. I respect that.”

Donna said since word has spread about what John is doing, she has met numerous people from Ukraine or people who have family there, including a young man working in her local packing and shipping store. She recently went into that store while on a video call with John and turned the phone around so he could have a quick chat with some people in there.

“One of the young men behind the counter was all smiles as he explained he has family in Ukraine and personally thanked John for what he is doing over there,” Donna said.

“I am proud of him, and what he and all the bomb techs are doing to help Ukrainians reclaim their lives, homes, and communities.”

'Everybody Can Spare a Dime or Two'

Culp has given himself a 90-day timeline for his mission in Ukraine. He said, by then, he expects he’ll be ready for a break. But he feels grateful he is able to be lend his expertise.

“Not everybody is prepared or physically ready to come over here and offer physical support,” he said. “I’m fortunate to feel like I had something technical to offer and that my body is still in good enough shape to come over and actually do it. Not everybody is going to feel that way. Not everybody can go … I’m not encouraging a wash of retired officers to come flying to Ukraine.”

He does, however, encourage his fellow MOAA members to contribute to humanitarian organizations supporting Ukrainians. “Everybody can spare a dime or two,” he said.

For Culp, volunteering in Ukraine feels almost personal. “There were lots of guys like me in the Fulda Gap ready to face the Russian invasion of Germany,” he said. “And it never happened, and now Ukraine is taking that hit. And I really feel in a way that they’re taking the hit that we were all expecting. With all of NATO and all our forces, we were expecting to take that hit in the Fulda Gap, and it never came. In a way, Ukraine is fighting our fight. 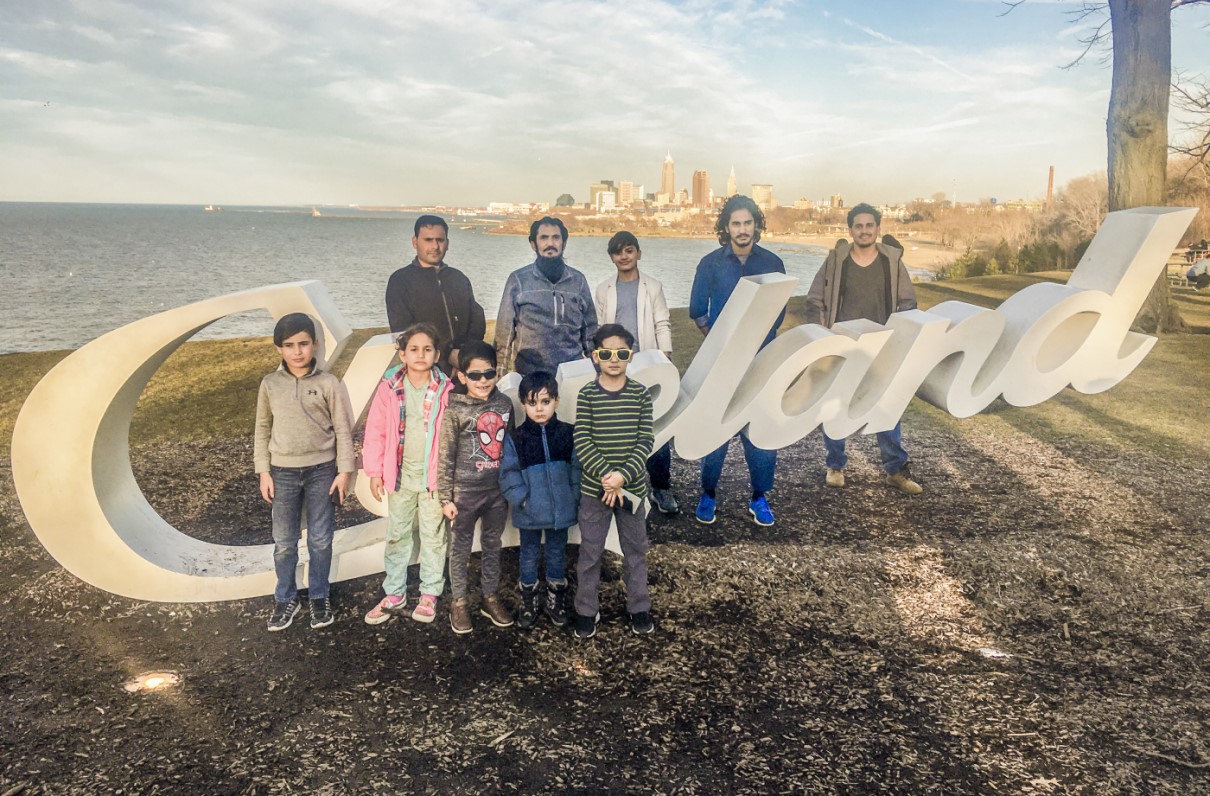 Learn how their work has helped families thrive in their new homes.

Meet these officers who were honored for extraordinary service to the Army.