A retired Navy captain is hoping to add some “Semper Fortis” pride to the streets of Virginia.

Roger Hirsh, whose career spanned enlisted, commissioned, and civilian roles in the Navy over 40 years, is leading efforts to make a specialized Navy license plate available to Virginia motorists. Virginia offers more than 250 specialty plates, including designs honoring the Navy Reserve and naval aviators, but does not offer a standalone “Navy” plate.

It's curious to Hirsh, given Virginia's rich heritage of naval service.

“The thing that was bugging me is, I live in a state that as far as the military, is predominately Navy. I would go places and I'd see Coast Guard plates, Marine plates, but never Navy,” said Hirsh, a Life Member of MOAA. “I kept asking, 'Why isn't there one?'”

It could be because sailors choose from other military plates already offered, including some honoring those who served in specific battles or operations, or are available only to recipients of certain military honors.

Undeterred, Hirsh decided to begin the process in April 2017 that would allow the state to offer Navy license plates.

That's when he realized another possible reason why the plate isn't available - the process can be long and tedious.

It took four months just to get permission from the Navy for the Department of Motor Vehicles to use the Navy emblem, Hirsh said.

“It is discouraging, but I believe it's something I need to do,” Hirsh said, describing the process. “To me, it's a way of showing Navy pride.”

For Virginia to approve a new specialty plate, at least 450 people must pre-order the design. The plates are $25 each; after the first 1,000 are sold, $15 from every subsequent plate goes to the Navy and Marine Corps Relief Society, which helps cash-strapped Navy and Marine families during times of crisis.

Hirsh has attended veteran events and bought a booth at a flea market to pass out applications - those interested in pre-ordering a plate can download an application here, or can email Hirsh at navy.plate.va@gmail.com. He had received 134 pre-orders as of Feb. 7; he'll need to reach 450 by December to make the legislative docket for Virginia's 2020 session, or he'll have to wait another year to try again. 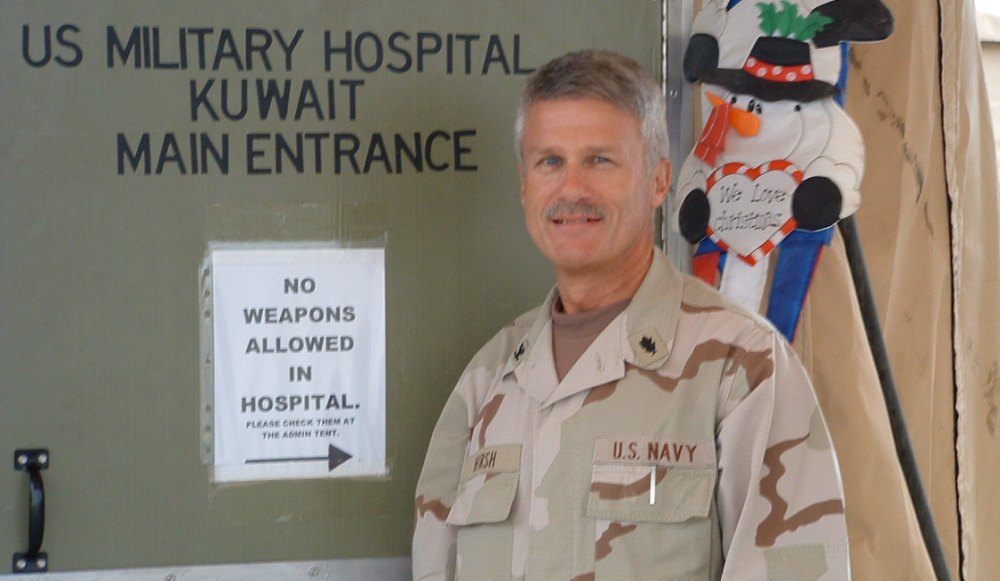 Hirsh enlisted in the Navy when he realized his number had come up for the draft lottery during Vietnam. He had been studying to become a pharmacist, but he waived his student deferment and enlisted as a corpsman.

He left the Navy in 1975 to finish coursework at Old Dominion University and the Medical College of Virginia, then re-entered service by earning his commission and serving as a Medical Service Corps officer and pharmacist. He retired in 2006, with service that included time in Kuwait, where he treated troops entering and exiting Iraq.

About 1½ years into civilian life, Hirsh missed his service and decided to work for the Navy as a civilian pharmacist, despite the pay cut.

“I like taking care of the folks that I had worked with,” he said. “It was a tough decision. The pay was less. But I'm glad I did it. It turned into a long and interesting career. No regrets. I'd do it all over again.”

Hirsh is married to a Navy veteran, and the couple's daughter also joined the Navy. Now, Hirsh wants to share his appreciation for his service with fellow motorists.

“It's a way for Navy folks to show pride,” Hirsh said. “It's also a point where Virginia can say, 'We're proud of our Navy.'”