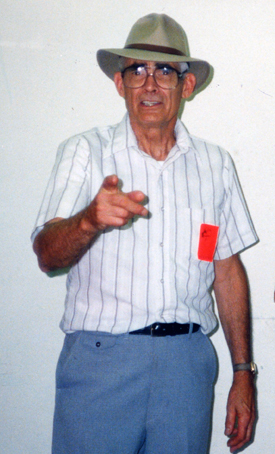 Walter Rutland Harris was born in Glennridge, New Jersey on April 13, 1921 to a banker/entrepreneur father and homemaker mother. He was the youngest of three children. His father died in 1924, leaving him and his siblings to survive on the grit and determination of their mother. The family moved around some before settling outside of Baltimore in Clarksville, Maryland in 1934. His mother was a strong believer in education, so even though it was financially difficult, she sent all her children to good private schools. Bucky spent his high school years at St. Paul’s in Baltimore on scholarship. He excelled in academics and exhibited early leadership traits on the lacrosse and football teams. Upon graduation he received a scholarship to study chemistry at the University of Virginia.

World War II began while Bucky was attending UVA. Before finishing his studies, he joined the Marines to fight for his country. He was selected to be a Marine flyer, and, after basic training, he traveled to Pensacola, Florida for flight training. While there, he happened to meet a lovely Southern belle on vacation with her girlfriends. It was truly love at first sight and within a week of his commissioning he married Genia Murchison in her hometown of Birmingham, Alabama. He soon departed for the South Pacific to join a Marine fighter squadron to fly F4U Corsair warplanes. When the war was over, he left active service and became a reservist, returning to the private sector in Alabama.

Bucky worked for a while with a pharmaceutical firm before he became interested in police work through association with his father-in-law and brother-in-law, both of which were Birmingham policemen. He enjoyed an increasingly successful career in police work until his reserve unit was activated to fight in the Korean War.

Bucky arrived in Korea in May, 1952, to fly F4U Corsairs in a Marine attack squadron. On May 6, while dive bombing enemy positions across the Chinese border, his plane was shot down with no confirmation of survival. For sixteen months he was listed as missing in action. His family had no confirmed word of his being alive until his release in the last group of POWs in August, 1953. He had spent sixteen months in several Chinese prison camps, enduring physical and mental torture, especially harsh due to his continual efforts to maintain prisoner moral and effect escape attempts. For his steadfast resistance and outstanding leadership, he was awarded the Legion of Merit. His actions are also cited in the Code of Conduct section of the Marine’s Handbook, as an example of how Marine POWs are to conduct themselves.

Bucky stayed in the Marines as a helicopter pilot, eventually being designated as Presidential Command Pilot. He served in that capacity for six presidents: Eisenhower, Kennedy, Johnson, Nixon, Ford, and Carter. He retired from the Marines in 1969 with the rank of Major.

Bucky and Genia bought a cozy little place in Clarksville, where he could pursue a passion for vegetable gardening while Genia tended to her flowers and they both indulged their love of animals. He became very active in his childhood church, St. Mark’s Episcopal, serving in various capacities. He reentered the world of chemistry with the Maryland gasoline testing lab until completely retiring in 1987. He remained very active helping neighbors with his farming skills and equipment, growing huge quantities of delicious vegetables, playing tennis, repairing cars, investing in the stock market, and loving his dear Genia, their two children and five grandchildren.

On Friday September 17, 1993, after returning from a weekly tennis match, Bucky collapsed at home and died at the hospital from a ruptured aorta. He was 72 years old.

His daughter, Emmylou Harris, wrote a song about her father. Listen and read the words to "Bang the Drum Slowly" ©2000 Emmylou Harris and Guy Clark.