House and Senate conferees finally agreed to move forward with an annual defense bill, one with a lower than expected pay raise and significant changes to military pay and benefits.

The defense bill capped the active duty pay raise at 1.3 percent. This marks a third consecutive year of pay caps, and continues to undo a decade of work by Congress to eliminate a 13.5 percent wage gap between military and private sector pay.

The intent of the plan is to provide a portable retirement benefit to troops exiting service prior to serving a full career. However, servicemembers are already eligible to use TSP, albeit without a government contribution.

MOAA has supported government matching of personal Thrift Savings Plan accounts, but it should not come at the expense of cutting military retirement, or cutting the payments to medically retired service men and women.

MOAA will continue to advocate for government matching for a full career.

The new plan also allows for a lump sum distribution of a portion of retired pay.

Current servicemembers and retirees will be grandfathered into the current retirement system. Servicemembers with less than 12 years of service will have the option to opt-in to the new program.

Slashing military retirement by 20 percent and providing a ‘401k-style’ benefit will erode career retention and provide a greater incentive for members to leave service early. Because the policy funds the new vesting provisions by imposing major cutbacks in benefits for those staying for a career, MOAA has great concerns about the impact on long-term readiness and retention.

MOAA was instrumental in repealing the COLA change, with members sending 300,000 messages to Capitol Hill in just a few months.

Although lawmakers rejected major changes to TRICARE this year, they made no bones about the fact that now that they’ve overhauled military retirement, their next focus will be on health care. In report language, lawmakers warned, “… that comprehensive reform of the military health care system is essential” and “all elements of the current system must be re-evaluated, and that increases to fees and copays will be a necessary part of such a comprehensive reform effort.”

One of the most contentious issues in the defense bill was the future of prescription copays. The administration’s original budget called for 10 years of TRICARE pharmacy increases.

Senate lawmakers agreed, and proposed increases of 25 to 125 percent.

Proposals to increase prescription copays fail to take into account that TRICARE beneficiaries now pay 145 percent more since 2011, and that pharmacy copays are already indexed to annual COLAs.

Fortunately, House conferees prevailed over the Senate, but had to concede to a one-year increase in prescription drug prices. 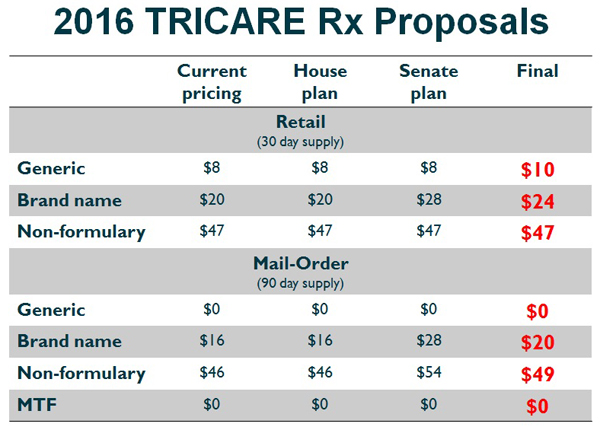 The defense bill also included language to correct an inequity for military survivors. The bill authorizes Survivor Benefit Plan coverage for a spouse in the event a former spouse predeceases the servicemember.

Original budget proposals called for both a consolidation of the commissary and exchange systems and a dramatic cut in commissary funding.

Those plans were thwarted thanks largely to the work of Sens. Barbara Mikulski (D-Md.) and James Inhofe (R-Okla.). They delayed any privatization efforts until further cost saving studies on the proposal are conducted. Sen. Mikulski also led the effort to restore over $300 million in commissary funding.

The commissary budget only decreased slightly because of Mikulski’s efforts. Patrons would have seen a reduction in the number of days open and operating hours.

The defense bill fell short on major MOAA-supported issues. The bill did not include provisions to:

“We are disappointed in the final defense bill and its adverse effect on military families,” says MOAA President Vice Adm. Norbert R. Ryan Jr., USN (Ret). “We must reverse this trend of eroding pay and benefits because we’re sending the wrong signal to the troops at the wrong time.”

With the political horizon looking the way it is, MOAA’s membership will be even more important next year to protect hard-earned benefits in service to the nation.