In the third season of MOAA’s Never Stop Serving Podcast, we are sharing first-person accounts from the wars in Iraq and Afghanistan. Each week, you will hear directly from the men and women who survived these battles, and how their combat experiences shaped the people they are today.

Each episode can be streamed below, or download/follow/subscribe to the podcast on Apple Podcasts, Spotify, Amazon Music, Google Podcasts, PodChaser, or TuneIn. Check back for even more platforms! 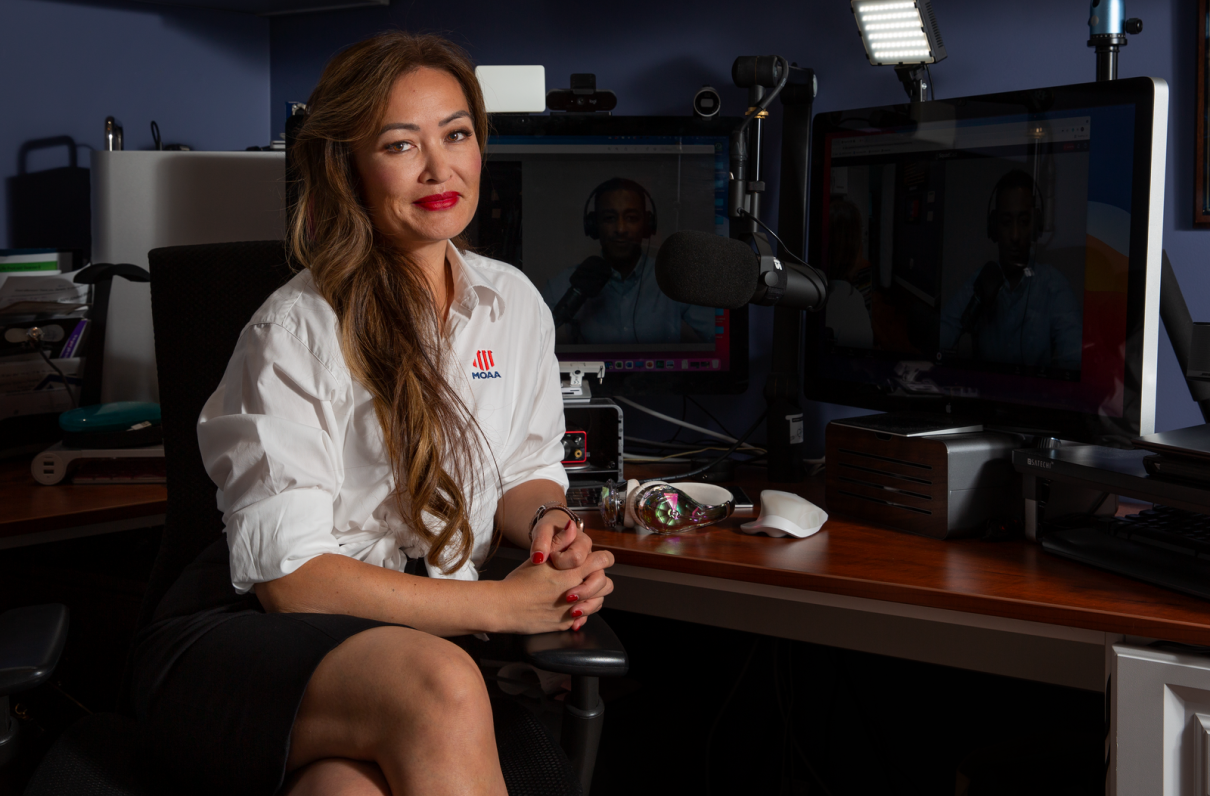 "I’m humbled and excited for Season 3. It’s about true heroes sharing their stories. It’s the emotion, the heartache of loss, but ultimately the bond of brotherhood and sisterhood of the military that keeps these warriors going. It’s these moments that I just can’t wait for our listeners to hear." -- Lt. Col. Olivia Nunn, USA (Ret), podcast host and Life Member.

Interested in joining MOAA? Learn more here, and find a chapter in your area here.

Episode 8: Host Lt. Col. Olivia Nunn, USA (Ret), speaks with Silver Star recipient Maj. Josh Glover, USMC (Ret). During his second deployment to Iraq, Glover, then a first lieutenant, was serving as a Quick Reaction Force platoon commander when they were sent out to secure a downed CH-53 helicopter. During the mission, the QRF platoon was ambushed but able to fight through and return back to friendly lines, inflicting numerous enemy casualties on the way. Later that same day, they were called out to rescue a rifle platoon fighting behind enemy lines. Lt. Glover and his platoon engaged and defeated a company-sized enemy element to reach the besieged Marines.

Episode 7: Host Lt. Col. Olivia Nunn, USA (Ret), speaks with Maj. Brian Cillessen, USMC (Ret). In January 2005, then-Capt. Cillessen was attached to a Special Forces ODA as an embedded trainer and Marine adviser for Afghan National Army commandos. While returning from a mission, his convoy was ambushed. Cillessen, now a television producer and host on The Sportsman Channel, details the actions in this battle that earned him the Silver Star.

Episode 6: In April 2004, Joe Ruggiero was a petty officer serving with a Coast Guard Law Enforcement Detachment aboard the Navy’s USS Firebolt in the Persian Gulf. Ruggiero and a team of Coast Guardsmen and sailors were conducting a boarding operation near an oil terminal when the boat they were intercepting detonated in an apparent suicide bombing, killing two sailors and one Coast Guardsman. For his actions that day, Ruggiero, now a chief warrant officer, became the first Coast Guardsman since the Vietnam War to earn a Purple Heart and a Bronze Star with "V" device for valor.

Episode 5: As Afghanistan fell to the Taliban in 2021, Elliot Ackerman, a former Marine Corps infantry officer and MARSOC team leader, found himself in the middle of an unofficial evacuation effort to help Afghan allies escape the country. Ackerman, a Silver Star recipient and author, wrote about the effort and his experiences in Afghanistan in his latest book, The Fifth Act: America's End in Afghanistan.

Episode 4: Melissa May didn’t grow up with fighter pilot dreams but the self-described "tree hugger and snowboarder" was recruited to swim at the the Air Force Academy. In due time May found herself flying combat missions over Libya by day and changing diapers by night. Now a retired lieutenant colonel, May talks about these adventures, the mission over Baghdad that earned her a Distinguished Flying Cross, and her transition to a commercial pilot for United.

Episode 3: Retired Col. Chris Barnett, an Air Force Pave Hawk pilot, was pulled off an instructor assignment and sent to Afghanistan to fly combat rescue missions in Helmand Province. His life-saving actions in the spring of 2009 resulted in two Silver Stars. Chris speaks about the high op tempo his unit faced, and the challenge of returning home.

Episode 1: CW5 Doug Englen, an Army Chinook pilot with more than 2,500 combat missions under his belt, co-piloted the first helicopter into Afghanistan following the Sept. 11 attacks. Englen was later chosen by Adm. William McRaven, then head of U.S. Special Operations Command, to plan the air component of the mission to capture or kill Osama Bin laden; McRaven called him "without a doubt, the finest Army aviator of our generation."

Episode 11: Project Enlist -- the Concussion Legacy Foundation. The Concussion Legacy Foundation (CLF) was founded by Chris Nowinski, Ph.D., and Robert Cantu, M.D. The work that Nowinski has started is vital to the military community; after 20 years of war in Iraq and Afghanistan, our veterans are working through mental health issues, and many still do not understand the signs and symptoms associated with brain injury. Listen to host Lt. Col. Olivia Nunn, USA (Ret), speak to Nowinski about the foundation's efforts.

Episode 10: Mental Health With Headstrong. Mental health includes our emotional, psychological, and social well-being. It affects how we think, feel, and act. It also helps determine how we handle stress, relate to others, and make choices. Unfortunately, for many of us in the military, it has been a taboo topic. It's been part of our world, but we don't talk about it for fear of losing our jobs, our clearances, and our identities. Listen to host Lt. Col. Olivia Nunn, USA (Ret), speak to retired Marine veteran and retired 1st responder Matt Kress, chief strategy officer at Headstrong, about why their organization can tackle the topic "head" on and do it well.

Episode 9: Life After Service With Zachary Bell - You've served your nation honorably, and you've hung up your uniform and tucked away your boots... so, now what? Life after service can be challenging. Leaving the structure of the military can be scary and stressful. Owning your transition is essential, but what happens when your transition doesn't go as planned? Host Lt. Col. Olivia Nunn, USA (Ret), speaks with Marine veteran Zachary Bell about his experience after leaving the Marine Corps. Zachary shares his challenges and how he ended up in the medical industry, and how that led to being known as the "Veteran with a Sign."

Episode 8: Diversity in Today's Military - Diversity, equality, and inclusion -- are these just the latest buzzwords, or do they actually mean something in the military? Is the military a diverse fighting force? How do we grow a diverse fighting force? Does diversity matter? Host Lt. Col. Olivia Nunn, USA (Ret), speaks with Capt. Pat L. Williams, USN (Ret), MOAA's program director, engagement and transition services, and a 35-year Navy veteran, and Anselm Beach, deputy assistant secretary of the Army for equity and inclusion and an Army veteran, about DEI.

Episode 7: Why the First Job Rarely Is a Fit - Roughly 44% of veterans leave their first civilian job within a year of employment, according to Hiring Our Heroes’ veteran employment survey. Reasons vary: 31% said they accepted their first job to make ends meet and never intended to stay, another 30% left for a better job, and 19% left because the job did not align with their expectations. Host Lt. Col. Olivia Nunn, USA (Ret), speaks to Virginia Department of Veteran Services experts Katie Spinazzola and Alfredo Torres about why your first job may not be a good fit and what to do about it.

Episode 6: How Community is the Key in the War on Mental Health with Dr. David Tharp - When many of us leave the military, we hear that our identity and the sense of giving back are lost. We also know that this sense of loss can impact our mental health. So how do we give back? What is "community"? Host Lt. Col. Olivia Nunn, USA (Ret), speaks with Dr. David Tharp, CEO and co-founder of Project Healing Heroes, on why giving back to the community is vital.

Episode 5: Merging Vets and Players - Host Lt. Col. Olivia Nunn, USA (Ret), speaks with Army veteran Nate Boyer, who deployed to Iraq and Afghanistan as a Green Beret, played football at the University of Texas, suited up for the Seattle Seahawks, and co-founded Merging Vets and Players (MVP), a program that brings veterans and athletes together for shared mentorship and focus on a new mission.

Episode 4: Financial Wealth Management: Planning for Your Rainy Day With MOAA - What exactly are you planning for your future? Is there a difference between savings and investment planning? Is having a 401(k) or a Roth IRA essential? Host Lt. Col. Olivia Nunn, USA (Ret), speaks with Lila Quintiliani, ChFC®, AFC®, MOAA's program director for finance and benefits education/counseling, on these topics and others. Want more? Sign up for MOAA's free April 20 financial webinar.

Episode 3: Olivia's Story - This week we turn the tables on podcast host Lt. Col. Olivia Nunn, USA (Ret), and she shares her story. Find out why she wanted to serve in the Army, why giving back matters to her, and, more importantly, why mental health in the military community matters.

Episode 2: Holding Down the Fort - The Military Family and the Backbone that Keeps it Together. In most cases, the military spouse tends to be the mom: The unsung hero that runs the household that plays nanny, caregiver, boo-boo fixer, carpool driver, after-school sports practice pick up, homework enforcer, chef, and so much more. But what we don't talk about is how all of these titles weigh heavily on the military spouse -- how all of these responsibilities day in and day out, year after year, impact their mental health. Listen to host Lt. Col. Olivia Nunn, USA (Ret), speak to Jen Amos and Jenny Lynne, two amazing military spouses and podcast hosts from Holding Down the Fort.

Episode 1: Stepping Back From Suicide. When we don't address our mental health journey, or seek help for the trauma we've experienced, it can lead to a dark place for many of us. Listen to host Lt. Col. Olivia Nunn, USA (Ret), speak with Army veteran Sammy Villela about his journey and how he almost used a permanent solution that could have impacted his family and friends. The following episode contains content related to a suicide attempt. Discretion is advised. If you or someone you know is in crisis, contact the Veterans Crisis Line at 1-800-273-8255 (press 1) or via www.veteranscrisisline.net.