(A version of this article by Kimberly Lankford originally appeared in the September 2022 issue of Military Officer, a magazine available to all MOAA Premium and Life members. Learn more about the magazine here; learn more about joining MOAA here.)

If you’re still in uniform, click here for advice on reducing your future tax bill before leaving service. Whether you’re making the transition the private sector in the coming months or you’ve been out of uniform for years, consider the tips below as you look to lessen your tax burden.

Understand state taxes when choosing where to live. “Tax planning has to be part of the calculus when making a decision about where to live post-military,” said Lila Quintiliani, AFC®, ChFC®, program director, financial and benefits education for MOAA. A lot of military retirees focus on how a state taxes retirement pay when choosing where to live. But if you’re working in a civilian job after retiring from the military, the state income taxes make a big difference, too.

“Since so many states exempt all military pension income today, [you] really need to consider the underlying variations between state tax codes,” said Tim Vermeer, senior state tax policy analyst for the Tax Foundation. “If you plan on starting a second career — as many military retirees do — you need to consider how the individual income tax system will treat your new earned income. For instance, both Florida and New York do not tax military pensions. However, if we dig deeper, we learn that New York exempts military pensions while taxing other earned income at progressive rates, whereas Florida doesn’t tax military pensions because it doesn’t tax individual income at all.”

If you are receiving military retirement pay, find out whether the state has a minimum age for the tax break.

“A handful of states offer partial exemptions of military pension income, but not until the retiree reaches a certain age — for some states that’s 55, for others it is 62 or 67,” said Vermeer. “For some military retirees who want to start a second career, it may not make sense to locate in that state until those exemptions kick in.”

And consider other kinds of taxes, too. “Look for states that produce the lowest overall tax,” said Lt. Col. Patrick Beagle, USMC (Ret), CFP®, owner of WealthCrest Financial Services in Springfield, Va. “Many people select a state based on ‘no tax’ on their retirement pay, but the overall tax is actually high because of things like high property taxes, high sales tax, and car taxes.”

Take advantage of retirement savings from your new employer. If you have a new employer with a 401(k) or other retirement-savings plan, make the most of this tax-advantaged savings opportunity. Pre-tax savings may be a bigger benefit now that you’re in a higher tax bracket, but you may still want to make some Roth 401(k) contributions to diversify your tax situation in retirement, especially since military retirement pay is subject to federal income taxes.

[RELATED: Roth or Traditional? Know the Difference Before You Decide]

“The way the tax tables work, they assume that is the only income you’re getting,” said Col. Curt Sheldon, USAF (Ret), a CFP® professional and enrolled agent in Alexandria, Va., and Life Member of MOAA. “It’s typical for me to see someone in their first year of retirement owing $6,000 to $8,000 in taxes.” Instead of getting this tax surprise when you file your tax return, you can go into MyPay and have more money withheld for taxes from your retirement pay, or you can increase tax withholding from another job, or make quarterly estimated tax payments.

Kimberly Lankford is a financial expert based in Virginia and the spouse of a retired Army colonel. 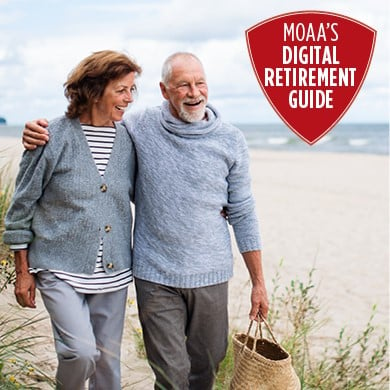 Your retirement, your way, with help from a trusted source -- MOAA's Digital Retirement Guide brings you information on retirement living nationwide, including easy-to-search entries and retirement news you can use.