CW3 Christopher Scott got a view of Niagara Falls recently that very few get to see.

On May 4, the New York Army National Guard helicopter pilot and MOAA member helped remove a 3,500-pound pontoon on the Niagara River that was located just a stone’s throw from the lip of the falls. The pontoon broke free during a storm in 2019 and had to be tied to a tree on a nearby Island so it wouldn’t tumble over the 325-foot precipice. 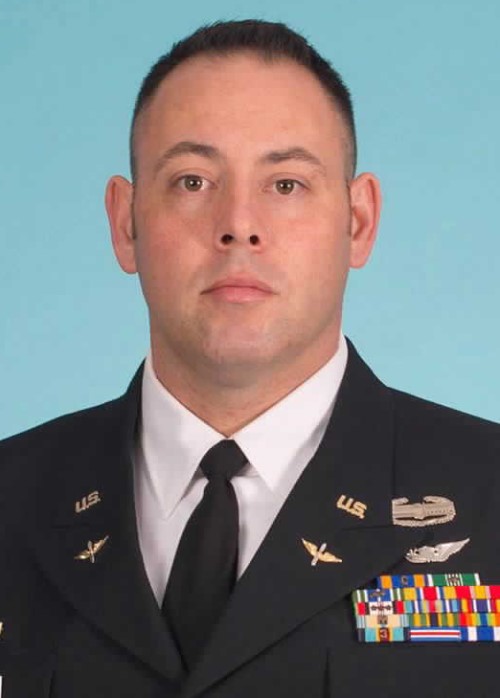 “It definitely was a unique mission,” said Scott, pictured, who could see the water tumbling over the falls as the CH-47 Chinook helicopter hovered 70 feet over the river. “There is a restricted area over Niagara Falls where you can’t fly below 3,500 feet. Unless you’re on a helicopter tour ride, you are not going to get that close to the falls.”

Scott is an instructor and mechanic test pilot for the CH-47 and served as mission manager during the operation. From the cockpit, Scott monitored the engine torque as the helicopter picked up the pontoon and backed up the pilot on altitude maintenance during the lift. Scott and the rest of the crew also monitored the airspace around the helicopter to ensure no trees or other objects were in the way.

Capt. Jonathan Peralta, who helped coordinate this mission for the New York Army National Guard, said Scott’s experience as both a maintenance test pilot and instructor pilot is invaluable for missions like this one.

Scott served as a helicopter maintenance mechanic while deployed to Afghanistan in 2007, then attended flight school four years later. Since then, he’s flown on international deployments as well as humanitarian-related Guard missions during Hurricane Sandy and Hurricane Michael. 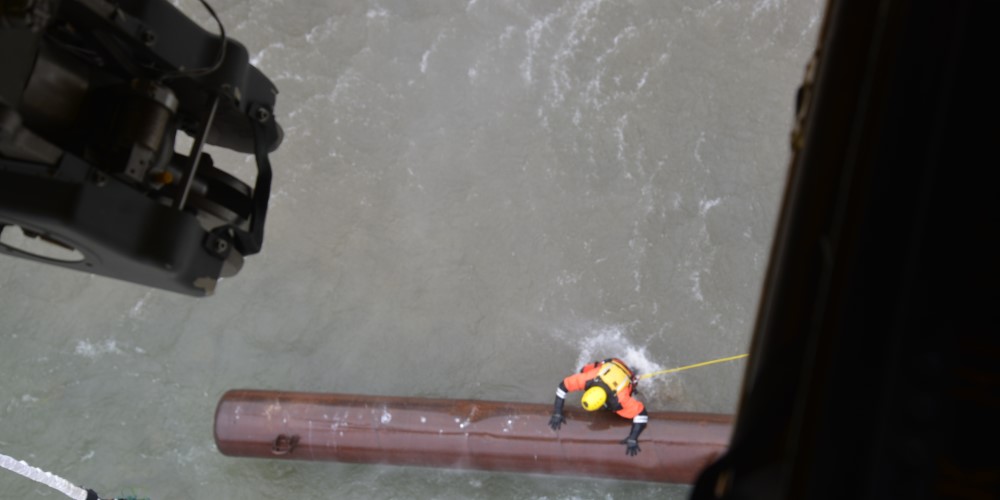 The view from the bottom hatch of a CH-47 Chinook shows a member of the New York State Park Police High Water Rescue Team clipping a lifting cable onto a steel pontoon in the Niagara River just above the American side of Niagara Falls in Niagara Falls, N.Y., on May 4. (Photo by Lt. Col. Roberta Comerford/New York Army National Guard)

The initial mission to remove the pontoon was scuttled due to COVID-related staffing issues. In December, the Guard began working with the New York Power Authority on how to safely remove the pontoon, which could have damaged the tourist destination Cave of the Winds had it gone over the falls. Because ice buildup is common above the falls, the project was done as the water began to warm up, Scott said.

After waiting out inclement weather on the morning of May 4, the crew of four flew from Rochester to Niagara, landing on Goat Island. Once the cables needed to attach to the pontoon were secured to the aircraft, a High Water Rescue team from the New York State Park Police waded into waist-deep water to secure the object. As soon as ground crew members hooked the lines to the pontoon, they went ashore on nearby Bird Island before the helicopter began the removal process.

When Scott’s team knew the load was secure, the helicopter lifted and held the pontoon a foot out of the water to ensure the aircraft could safely start flying. According to Scott, this is done to make sure the weight of the pontoon was the same as was calculated during the planning stages.

“There is always the concern that the pontoon had a hole in it and could be taking on water,” Scott said.

The 39-year-old Scott will likely have many more aerial adventures as part of the Guard, including the possibility of fighting fires in the Adirondack Mountains of upstate New York. The Guard has already conducted exercises in Lake Erie in which CH-47s are used to pick up and drop off large volumes of water that could be used for fighting fires.

“After 20 years in the Guard, hopefully you get to CW5,” Scott said. “I will be eligible for CW4 next year.”