(Updated March 3 with House passage of Honoring Our PACT Act)

The push to provide veterans exposed to toxins during service with the benefits they deserve took significant steps forward on all fronts to begin the month, from the halls of Congress to the State of the Union address to a major change in VA policy.

MOAA has worked with both the legislative and executive branches for years to secure comprehensive toxic exposure reform, looking to avoid the mistakes and major delays from previous generations and create a transparent, rapid process for determining and rewarding benefits to veterans. The issue took center stage March 1 as part of the president’s State of the Union address.

[TAKE ACTION: Ask Your Senators to Support the Honoring Our PACT Act]

On March 3, the House of Representatives moved on the president's request, passed the Honoring Our PACT Act (H.R. 3967) 256-174. The omnibus reform bill moves to the Senate, which has passed less-comprehensive legislation.

Hours before Biden’s address, the VA announced plans to add nine new cancers to the list of presumed service-connected ailments:

VA Secretary Denis McDonough called the move “the right decision,” adding that the “rarity and severity of these illnesses, and the reality that these conditions present a situation where it may not be possible to develop additional evidence prompted us to take this critical action.”

The announcement marks the beginning of the rulemaking process. The VA said it would allow for public comment on the proposal and would “conduct outreach to impacted veterans and survivors” after the process is complete.

The Honoring Our PACT Act

The morning after Biden’s address, MOAA joined House leadership, veterans advocates (including comedian Jon Stewart), and others at a media event supporting the passage of the Honoring our PACT Act, a reform measure supported by MOAA and dozens of other military and veterans advocacy groups. 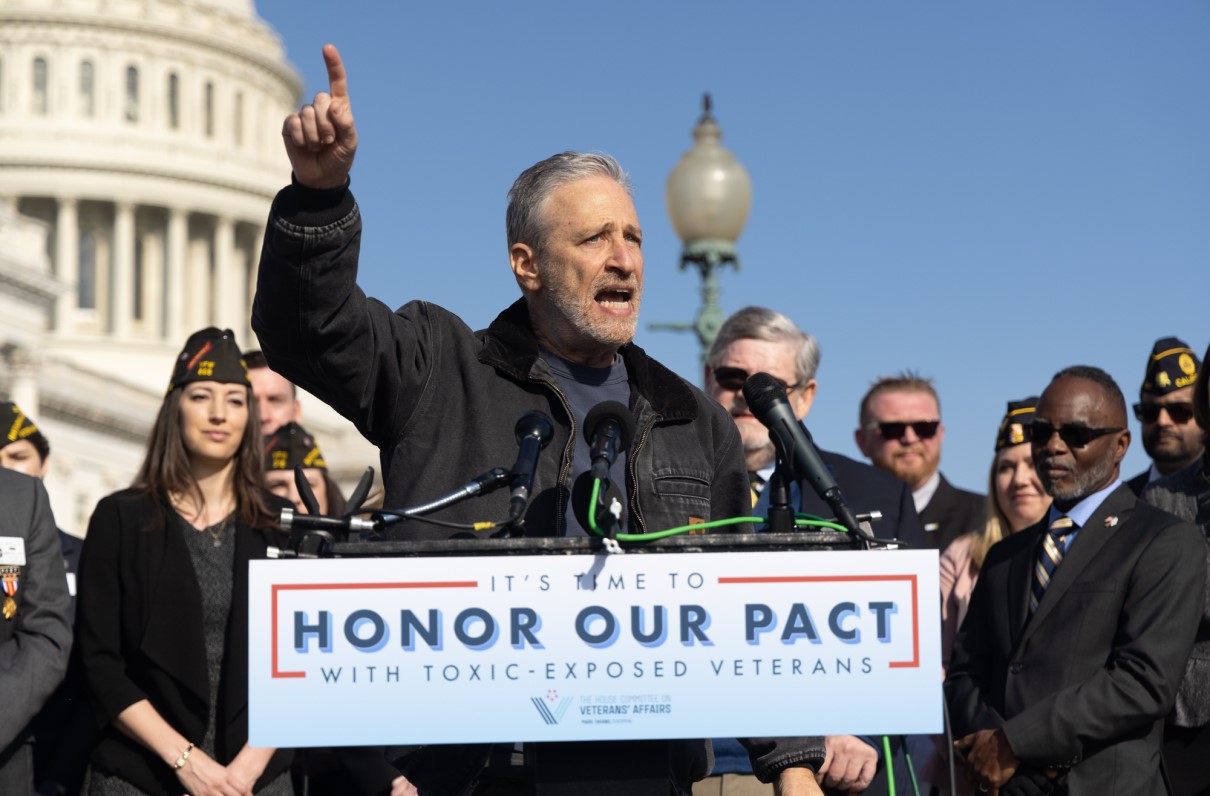 Comedian Jon Stewart speaks during a March 2 press conference in support of the Honoring our PACT Act in Washington, D.C. (Photo by Mike Morones/MOAA)

The bill would provide access to care for 3.5 million veterans exposed to burn pits, said Rep. Mark Takano (D-Calif.), the chairman of the House Committee on Veterans’ Affairs and the bill’s sponsor. It would add 23 respiratory illnesses/cancers – including those in VA’s proposed rule – to the list of presumptive ailments, and would also make the following significant changes to benefit eligibility:

“There is no other toxic exposure legislation in Congress like it in scope or soundness,” Takano said. “And with the support of 42 veterans organizations and 100 co-sponsors, we have the momentum.”

MOAA has supported the legislation since its introduction in June.

“We look forward to collaborating with Congress to ensure implementation of these long-needed reforms to the presumptive process, and to ensure these new standards are applied to the provisions in the bill not yet supported by scientific evidence,” MOAA President and CEO Lt. Gen. Dana T. Atkins, USAF (Ret), said.