(Portions of this article appear in the October 2021 issue of Military Officer, a magazine available to all MOAA Premium and Life members. Learn more about the magazine here; learn more about joining MOAA here.)

Many military officers are shaped by family members, mentors, and others along the way, and those of Hispanic descent are no exception.

Obstacles haven’t held them back. Some didn’t know English. Some found it difficult to visualize a Hispanic leader. Some felt isolated because of the way they looked. Sometimes, what once set them apart has become a point of pride.

Although they comprise just 8% of the officer corps — according to a 2019 report by the Congressional Research Service — Hispanics continue to make an impact on the military.

Several young officers-in-training on the verge of commissioning shared thoughts on their own journeys — where they came from, where they hope to go, and their words of inspiration for a new generation of officers.

“They’re my heroes and heroines,” said Maj. Gen. Angela Salinas, USMC (Ret), a MOAA Life Member who in 2010 became the first Hispanic woman to reach the rank of major general. “Everyone who’s Hispanic and has served in the military that sees young people, we know that our future’s bright because of them.” 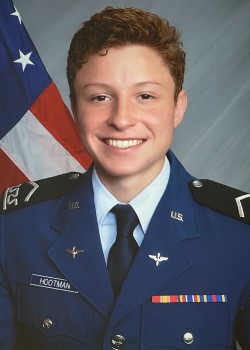 When young Hispanic men see Andrew Hootman in his shiny boots and neatly pressed Air Force uniform, he hopes they can envision themselves.

Hootman, whose mother immigrated to Texas from Mexico, traces his success to lessons of hard work from his parents, along with the support of countless mentors.

“I think to simply take small steps in your day-to-day life and take action within the boundaries you’re capable of can make a huge change over time. Little by little, all these small actions can add up to a lot. If we can get everyone to take steps, that’s a movement.” 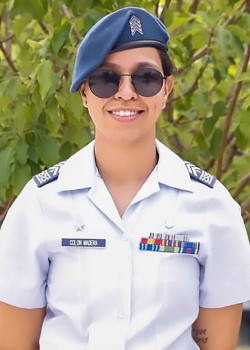 Although she didn’t know much English, Shakira Colón Madera moved from her home in Puerto Rico to attend college in the U.S. She’s in her third year at the Air Force Academy, where she is studying to become a doctor.

“One of my biggest hopes with this journey is that I make people feel empowered, dream big, and believe in themselves. I haven’t made it this far just by doing it on my own. There have been a lot of people along the way that have helped me. It doesn’t matter where you come from. I came from a small town in Puerto Rico. That shouldn’t stop people from dreaming big.” 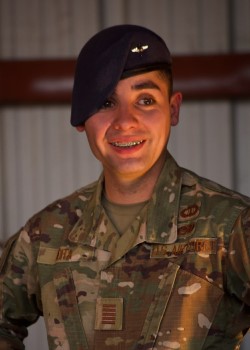 Alberto Moita had always been interested in law enforcement, like his father, but he said the security job he worked while taking community college courses didn’t fulfill him. Instead, he changed paths and pursued the Air Force, ultimately earning a spot at the Air Force Academy. He’s set to graduate and commission this year — the first of his family to earn such a distinction.

“Even when you come from almost nothing, to make it this far and be the first generation to graduate from a military academy, it’s very possible.” 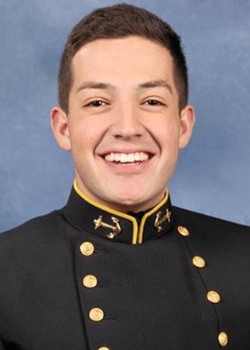 Carlos Pérez was inspired to serve by his own family. His grandmother was a nurse for the Air Force, and his father retired from the Air Force as a master sergeant after 20 years of service.

Pérez said he is looking forward to taking command during a transformative period of the military when senior leaders have pledged to celebrate diversity. Ultimately, he said, that will help officers as they lead.

“What makes [people] different is what empowers us as a team, and if we recognize that, we can definitely be a stronger military force as well.” 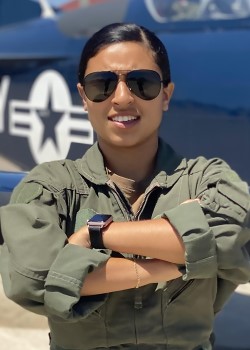 Each time a Hispanic woman takes the oath of office, Alondra Reyes hopes the path has become easier to navigate. She couldn’t always imagine Hispanic women commanding troops. In fact, she didn’t meet one until halfway through her first semester at the U.S. Naval Academy, sparking a personal mission to encourage Hispanic women to serve and to envision themselves as leaders.

“I’d like to find a way to open up doors. These are experiences I never thought I would have. I’d like to share that with those who would also never think of themselves to be in a position where I am right now.” 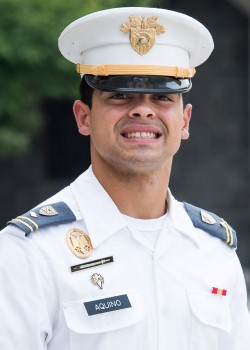 When Miguel Aquino commissions in 2023, he hopes his first salute will be rendered by the man who taught him the value of family and perseverance — his father, Lt. Col. Miguel Aquino, USA. The elder Aquino initially enlisted into the Army to take care of his family after a hurricane struck his hometown in Puerto Rico in the 1990s.

“I take a lot of pride in my culture. ...  [In Puerto Rico,] we are a mix of three races — Spaniards, Taino Indian, and African — so it’s a good example to show that people come in all shapes, colors and sizes, but at the end of the day, we all bleed red. We have to work together.” 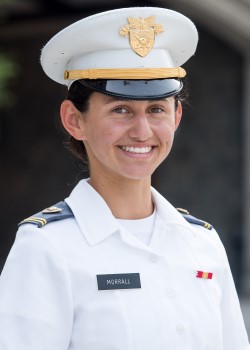 Standing at the front of formation, Jessica Morrall instructed cadets during summer training. During a break, she said, she stopped to chat with a few of the incoming cadets. They weren’t used to seeing a woman lead formation, but it was even more special to see a Hispanic woman in command, she said, recalling their conversation. Combined with examples of strong women in her own family, that motivated Morrall to set an example for other Hispanic women.

“The most important thing about being Hispanic and being in the service is being able to look up to people who look like you,” she said. “It’s honestly a motivating force for me to stay in. It’s hard when you look around and … I don’t have anyone to practice my Spanish skills with. I think just seeing other people that look like you and you can relate to them, you just kind of motivate each other. I think that’s really important for the service because a lot of the enlisted, there’s a high proportion of Hispanics, so it’s important to have leaders that are also Hispanic.” 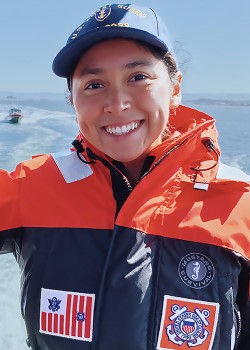 Military service brought Nayalina Tamariz’s parents together. Her mother was serving in the Coast Guard and stationed in Peru when she met her father. Tamariz was inspired to follow in her mother’s footsteps to attend the Coast Guard Academy. She said she’s excited her journey begins as the military pledged to become more inclusive.

“In this transformative period, the more action you take and the bigger voice that you have, the more change you’ll be able to see happen. I just hope, more than anything, to lead by example — to see the accomplishments that I can achieve, that I can do as a Latina.”

The MOAA Scholarship Fund provides interest-free loans and scholarships to children of military families: $8.5 million of educational assistance was provided in the 2021-2022 school year, including a record $2.6 million in grants for over 1,100 students.