Lt. Gen. Arthur J. Gregg, USA (Ret), served a military career that spanned nearly 36 years and included assignments in Korea, Vietnam, Japan, Germany, and Washington, D.C. He began his service as a private in 1946 and received his third star in 1977 after becoming director of logistics for the Joint Chiefs of Staff. His final assignment before he retired in 1981 was as deputy chief of staff of logistics for U.S. Army. He received the Army Commendation Medal three times, the Legion of Merit, the Defense Distinguished Service Medal, and the Army Distinguished Service Medal.

Gregg was born in the rural community of Florence, S.C. in May 1928. His parents owned a farm that produced primarily cotton and tobacco. He attended grade school about 3 miles from his family’s home, but when he reached high school age, no high schools were available to him in his community.

“The nearest school available to Black people was in the city of Florence, which was 10 miles from my home,” he said. “So you had two options: Your family could drive you or you could arrange living accommodations in the city.” Neither was viable for Gregg and his family, so his older brother and his family invited him to live with them in Newport News, Va., and attend high school there. 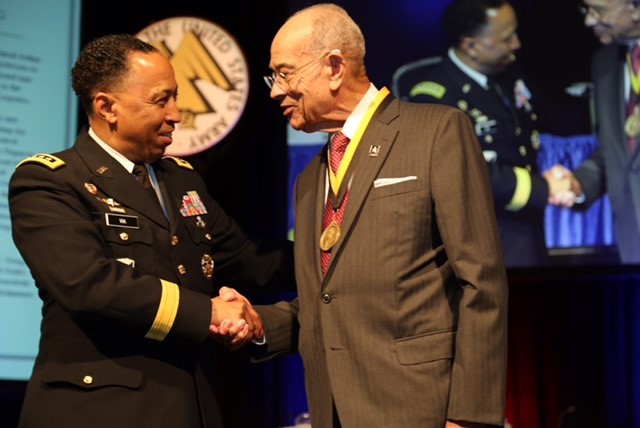 A year later, after graduating high school, Gregg had a brief stint in the Merchant Marines. “I became an abled-bodied seaman,” he recalled. He was placed aboard a cargo ship transporting coal from Newport News to Plymouth, Mass.

“I made the trip there and back, and quite frankly, that experience was enough to tell me there were better options in life.”

He then attended Chicago College of Medical Technology to become a medical laboratory technician, with the goal of opening his own clinical laboratory in Newport News. However, that was a challenge.

“At that time, I would serve almost exclusively the Black population in Newport News, and most of the doctors there took their laboratory work to the local hospital as a means to keeping the hospital financially afloat. Plus, I was only 17 years old — tough to be taken seriously.”

That July, after completing basic training, Gregg was sent to Germany as a medical laboratory technician.

There, he ran into a problem. “No hospitals in Europe operated by the military were staffed by African-Americans,” he said. “The Army at that time was not prepared to assign me to a non-Black-staff hospital. I was in Europe as agreed, but there was no logical assignment for me.”

He eventually was assigned to a quartermaster supply truck company and was appointed the unit supply sergeant.

When his three-year commitment was close to ending, he applied and was accepted for Officer Candidate School (OCS), graduating in May 1950.

“I wasn’t ready to leave the Army,” Gregg said. “I enjoyed being a soldier.”

For the next three years, he served as an instructor at the Quartermaster Leadership School at Fort Lee, Va., followed by assignments in Korea, Japan, and Pittsburgh.

In 1958, Gregg applied for and was accepted into the regular Army and was assigned to the advanced officers course at Fort Lee.

In late 1965, Gregg was promoted to lieutenant colonel and almost immediately placed on orders to command the 96th Supply and Service Battalion at Fort Riley — already alerted for deployment to Vietnam. They arrived there via ship in May 1966.

Gregg said his time in Vietnam was one of the most satisfying jobs he ever had. “We had a demanding mission, 24 hours a day,” he said. “There was no time for people to get into trouble. Everyone was well-disciplined, worked hard, and had pride in the mission.”

Gregg returned home and reported to the Army War College in Carlisle, Pa., in 1967.

He served assignments in Germany, before returning to the U.S. in 1971, where he was assigned to the Office of the Deputy Chief of Staff of Logistics at the Pentagon.

He was promoted to brigadier general in 1972 and reassigned back to Germany to command the Army and Air Force Exchange System and later the G4 for the European Army Command.

In 1977, he returned to the U.S. to serve as director of logistics for the Joint Chiefs of Staff and was promoted to lieutenant general.

His final assignment before retiring in 1981, was as deputy chief of staff of logistics for the U.S. Army.

For the next almost two decades, Gregg held a number of senior positions in the private sector.

He retired in 2000 and continued to serve on the boards of several nonprofit and for-profit organizations.

In 2016, Gregg received the General Creighton W. Abrams Medal from the Association of the United States Army for his outstanding contributions to the advancement of the Army as well as the Army’s inaugural Lt. Gen. Arthur J. Gregg Sustainment Leadership Award, established in his honor.

In September 2020, the Army Quartermaster Museum at Fort Lee unveiled a wall honoring the contributions of Gregg and his late wife, Charlene. Gregg looks back on his career fondly and credits much of his success to the support of his family.

“I enjoyed my service, and my family supported me well,” he said. “I was fortunate to have a great wife. She was a big plus in my career and my life.”