During his 34-year career in the Navy, Rear Adm. Jack Buffington rose to the position of chief of engineers and commander of the Naval Facilities Engineering Command, responsible for all Navy contracting and public works worldwide and representing the 24,000 active and reserve Seabees in the Navy. 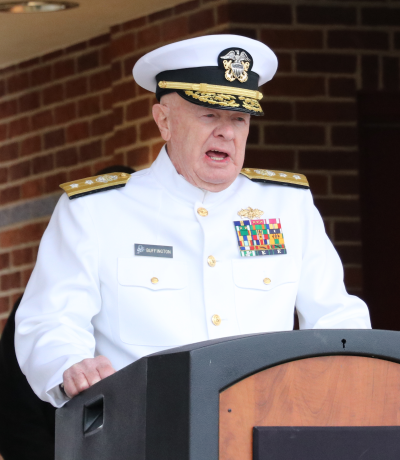 After retiring from the Navy, Buffington served in academia, helping to run the Mack-Blackwell National Rural Transportation Study Group, where he oversaw construction issues affecting rural America. He also taught construction management at the University of Arkansas and received the 1999, 2002, 2004, and 2009 “Outstanding Service to Student Award” from the College of Engineering. In addition, he was selected for the 2002-03 State of Arkansas Professional Engineer of the Year Award.

But now his focus is on assisting members of his local community.

Buffington is a first responder and heavy-equipment operator for the Rocky Branch Volunteer Fire Department an area south of Beaver Lake, Ark. For the past 12 years, he has helped his community in a variety of medical and fire call responses. In the majority of his calls, Buffington drives the 2,000-gallon tender that provides water to the fire engines. He also is qualified to drive all department vehicles, which include six fire vehicles and one boat.

"We have in excess of 125 calls per year," said Buffington. Approximately 80% of the calls are medical and about 20% are fire calls.

In addition to his work with the fire department, Buffington is an active member of the Northwest Arkansas Chapter of MOAA. He volunteers to present awards to local cadets, and earlier this year, he assisted at the dedication ceremony for a memorial honoring naval construction at Fayetteville National Cemetery.