James “Maggie” Megellas, a World War II Army officer who became a legend after he single-handedly wiped out a German tank with grenades during the Battle of the Bulge, has died. He was 103.

Megellas, a Life Member of MOAA and retired Army lieutenant colonel, is known as the most decorated officer in the history of the 82nd Airborne. He is the recipient of the Distinguished Service Cross, two Silver Stars, two Bronze Stars, and two Purple Hearts; he was recommended for the Medal of Honor in 1945 and again decades later through legislative efforts.

"In these times, we need more people who would put country first the way 'Maggie' Megellas did," said Rep. Glenn Grothman, a Republican from Megellas' native Wisconsin who renewed those efforts last year. "I am so honored to have known him and his wonderful wife.” 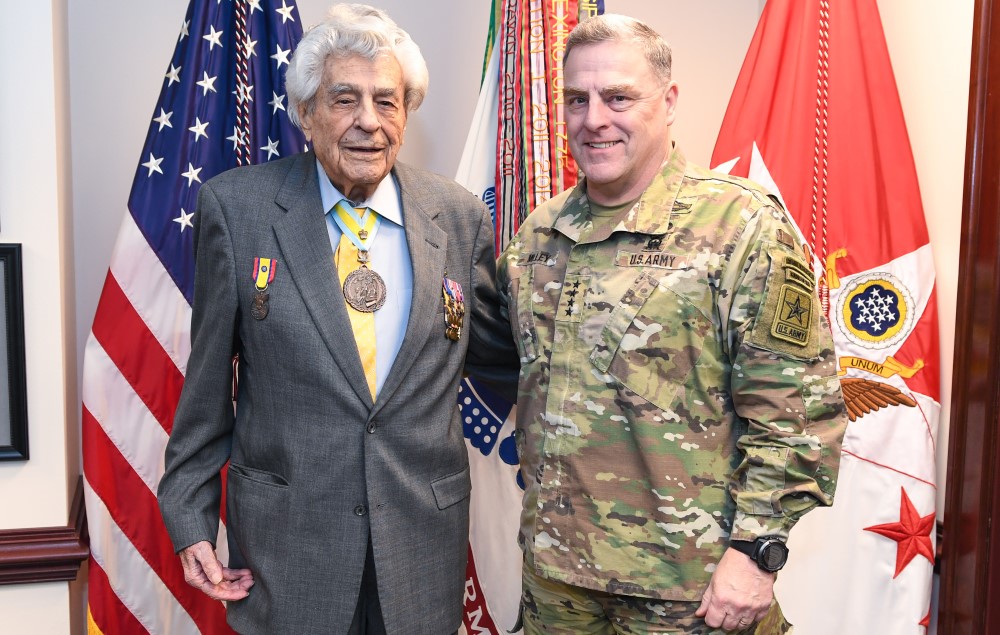 A statement from the 82nd Airborne called Megellas "An All American icon,” saying his actions as "one of the original Devils in Baggy Pants ... paved the way for the paratroopers who serve in the division today."

Megellas was a young lieutenant in the Army when he was ordered to rush his platoon through waist-deep snow into the Battle of the Bulge.

The platoon advanced toward Herresbach, Belgium, surprising about 200 Germans who were moving out of the town. A German tank took aim at the Americans, according to reports.

Megellas ran toward the tank, disabling it with a single grenade, according to reports. He climbed on top of the tank and cropped another grenade inside.

Megellas led the platoon as they cleared the town.

“Town in our hands; Approximately 100 dead Krauts and about 100 PW’s [Prisoners of War]. PW’s still coming in. We have no causalities,” according to a 1945 after-action report from Megellas’ unit, the 504th Parachute Infantry Regiment.

The Medal of Honor was recommended for Megellas in 1945, shortly after his actions during the Battle of Bulge, but documentation from the battle was not considered, leaving the honor in limbo.

Megellas spoke to Military Officer in 2019 about the renewed efforts to receive the Medal of Honor. He said the most important recognition he received was the respect of his comrades.

“I have all my buddies – thousands of them – that still recognize what I did,” he said, by telephone from his home in Texas. “In one sense, I’ve received many of the benefits of the medal, which is the approval of my buddies that I fought with.”

A post office in Megellas’ hometown of Fond du Lac, Wis., was named for him in 2016. Two years later, he was a member of the inaugural class of the 82nd Airborne Division's All American Hall of Fame.

The iconic actor shared his thoughts while under quarantine in Australia. He wrote, produced, and starred in the World War II story.