(This article originally appeared in the August 2022 issue of Military Officer, a magazine available to all MOAA Premium and Life members. Learn more about the magazine here; learn more about joining MOAA here.)

Overseas and at home, our National Guard remains busier than ever as they support our nation.

In the past year, servicemembers fought forest fires on the West Coast, rescued citizens from a hurricane in the Gulf of Mexico, and deployed military medical teams to major cities to support civilian hospitals overwhelmed with COVID-19. All of these examples demonstrate heroic service by those who stand ready while we enjoy the support and security they provide.

As the calls continue, the need to act on challenges facing our reservists becomes more urgent.

The importance of predictable, timely funding for reserve components’ operations and planning was a key message from witnesses at a hearing of the House Appropriations Subcommittee on Defense in late May. The days of the reserve component being used as a strategic, break-glass-when-needed force are long gone.

If our nation is going to use the Guard and Reserve troops as an operational force, we must support them like one. The “total force” concept must be totally supported; this guides MOAA’s legislative priorities as we seek to address many long-standing issues. Here is a look at the most critical issues for currently serving reservists, veterans, and retirees:

The years of constant activations are wearing on the active and reserve forces. Earlier this year, Maj. Gen. Ed Thomas, the top Air Force recruiter, said, “We will struggle to meet our recruiting goal for fiscal year 2022. This is really the hardest recruiting environment since about 1999.”

The DoD’s budget request dropped its end strength numbers by over 4% on active duty with the reserve component being reduced by half a percent. DoD’s request is set at the level DoD expects to be able to recruit new troops.

The outlook does not appear it will get less challenging. Of the 17- to 24-year-old population who meet the physical and academic standards, only 1.5% have the propensity to serve. As Thomas highlighted, DoD is in a “pitched battle for talent” with the private sector.

[FROM THE ARCHIVES: Always Ready: A Year in the National Guard]

To make sure the reserve component is able to keep pace and fill its ranks, we must focus on taking care of these troops and helping them manage both of their jobs. Once we manage to recruit the best and brightest our nation has to offer, we need to make sure we keep them.

Unfortunately, there is a lot of work to be done to help our reserve component troops. To serve in the National Guard means constant transition – on and off different duty statuses, to and from missions here and abroad – while trying to manage and progress in two different jobs.

A major win from the FY 2022 National Defense Authorization Act (NDAA) was the elimination of pay disparities for troops for Aviation Career Incentive Pay (ACIP) and Hazardous Duty Incentive Pay (HDIP). However, this is still subject to DoD’s final approval and must be closely monitored. 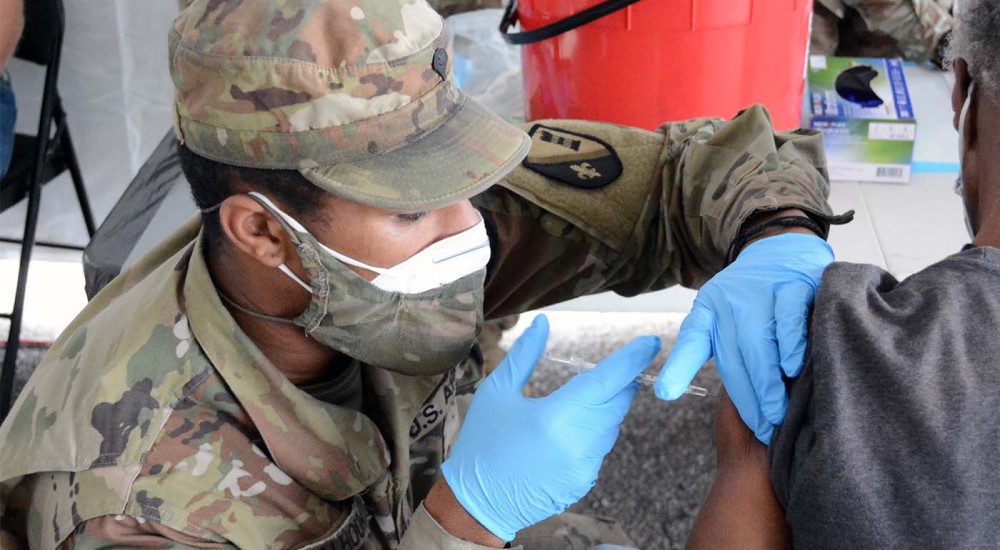 Medical readiness is a cornerstone of service, yet the reserve component lacks the health care coverage provided to active-duty servicemembers. About 16% of Guard and Reserve troops do not have health insurance, according to Defense Department data, and that presents a risk to medical readiness. But there is promising news: A bipartisan House bill introduced in June would waive premiums and copayments for National Guard and Reserve Servicemembers under the TRICARE Dental Program. MOAA supports the Dental Care for Our Troops Act, which is part of the larger Healthcare for Our Troops Act of 2021.

A Guard officer-specific concern is the promotion and pay delays associated with the Federal Recognition (FEDREC) process. Unlike active duty servicemembers, a National Guard officer can hit their time in service, but not receive federal recognition for 6-12 months, sometimes more. This means they’re missing out on the increased pay during that time. People pinning grades greater than O2 or W2 do not receive any back pay. This means officers are missing out on pay and recognition despite having earned the promotion.

When troops are activated, they leave their job with reemployment rights. However, not all who go to serve get to return to their jobs. Forced arbitration contracts are being used by some employers and companies to strip these important Uniformed Services Employment and Reemployment Rights Act (USERRA) and Servicemembers Civil Relief Act (SCRA) rights. This exploitative practice must end. MOAA supports banning these contracts and ensuring servicemembers cannot have their rights stripped away unjustly.

Most employers are doing the right thing and supporting troops as they deploy and serve our nation. When this happens, these businesses lose talented employees. We can support these businesses by offering Work Opportunity Tax Credits (WOTC) when they have an employee who is activated. This helps the business financially while they temporarily lose an employee due to an extended activation.

National Guard troops do not have access to relief societies like Army Emergency Relief or Air Force Aid Society that active personnel have. This increases the chance they will end up seeking to make ends meet by going to a payday lender.

Because they are not on Title 10 orders, they will not have the Military Lending Act (MLA) protections they deserve. Getting indebted to a lender charging predatory rates will harm a servicemember’s financial readiness and consequently harm their unit. For this reason, MOAA supports expanding MLA to all uniformed servicemembers.

One of the major reforms needed is duty status reform. MOAA has kept a close eye on this and encouraged DoD and the White House to simplify the more than 30 types of orders a servicemember can serve on. Unfortunately, because of all these different order types, the benefits are not always equal. An active-duty soldier and a Guard soldier can be doing the same job, side by side, but they may not be receiving the same benefits or protections under the law.

[FROM MILITARY ONESOURCE: More About the Military Lending Act]

After serving our country for a tour or a career, all servicemembers deserve to have equal recognition and access to their earned benefits, including the reserve component.

When reserve component veterans and retirees take off the uniform, they face bureaucratic challenges to get their earned benefits; that starts with the document recognizing their service. The DD-214, the basic document that everyone is familiar with, is not something all National Guard troops get based on their order types. That can lead to processing challenges.

But according to a DoD memo released earlier this year, Guard and Reserve members who leave service will soon receive a new version of the DD-214 form upon separation. The change — which is set to be in place by February 2025 — standardizes paperwork across the components, making it easier for Guard and Reserve members to receive veterans benefits. MOAA has supported moves toward such a standardization, including the Record of Military Service for Members of the Armed Forces Act of 2022 (H.R. 7041), a bill that would create a “Certificate of Military Service” for all components.

The new DD-214-1 form for reserve-component members also will provide a date for retirement pay eligibility, according to a Military Times report, simplifying a sometimes-complicated calculation.

When a retiree is able to start pulling their first paychecks, they face long delays in having their paperwork processed. After a career of service, retirees shouldn’t have to wait once more on the DoD to process their retirement paperwork. The effective date of their retirement pay could be calculated when they leave service, not a couple of decades later.

The cascading effect of this inefficient process is that retirees don’t have access to their TRICARE benefits until their paperwork is processed. This means they are paying out of pocket for health coverage or need to wait to retire. Additionally, “gray area” retirees receive early retirement pay due to deployment credits but do not receive TRICARE benefits any earlier than 60 years of age. MOAA believes this is unjust and is working to fix these issues.

It should not be this difficult to serve one’s nation. Unless we implement these critical actions, we can expect DoD to continue to struggle to find brave and talented men and women to put on the uniform to defend our country.