(This article by military culture reporter Tony Ware originally appeared in the June 2021 issue of Military Officer, a magazine available to all MOAA Premium and Life members. Learn more about the magazine here; learn more about joining MOAA here.)

Former Capt. Joe Quinn, USA, a West Point graduate who served two tours in Iraq as well as a tour in Afghanistan, spent many hours in dining facilities reminiscing about one food: hot dogs.

Most of all, he was nostalgic for a hot dog that no longer existed: the original Coney Island hot dog invented by Charles Feltman in 1867.

Once he transitioned out of the military, Quinn (pictured), partnered with his brother, Michael, to relaunch the award-winning Feltman’s of Coney Island, “the first modern American frankfurter,” with just a Wix site connected to Shopify and an apartment full of meat coolers.

Six years and much expanded facilities later, the all-natural, all-beef hot dogs are sold in over 3,000 supermarkets.

Joe Quinn talked about his venture with Military Officer just in time for the summer cookout season.


Q. How did Coney Island inspire where you ended up?

A. I grew up as the youngest of three brothers in southern Brooklyn, so we spent our summers in Coney Island. The one thing I always connected with Coney Island is authenticity. It may have amusements and rides, but it wasn’t gimmicky; there was a realness to it, a beauty.

Grandfathers and uncles [told] us about this mythical restaurant, Feltman’s. They always told us that it was like Disney World. It was the biggest restaurant that you’ve ever seen in your life. It closed in 1954 and didn’t exist by the time we were kids, but [this history] was just sort of embedded in us.

Starting a business was just something we always wanted to do, particularly for my oldest brother, Michael. Then it was my brother Jimmy’s idea that he was going to go to Wall Street, make a whole ton of money, and then use that money to fund our business, with the main idea of bringing Feltman’s back. Unfortunately, his life got cut short at 23, when on 9/11 he was killed in the North Tower while he was working for Cantor Fitzgerald.

Sometime in 2015, after I served in the military, Michael and I were at a Manhattan bar talking about it, and the idea brought a vitality to us that we haven’t felt since Jimmy was alive. … Knowing that the missing link would be Jimmy and … his ability to network, his type of business mind, that’s where I would have to fill in a lot of the gaps. 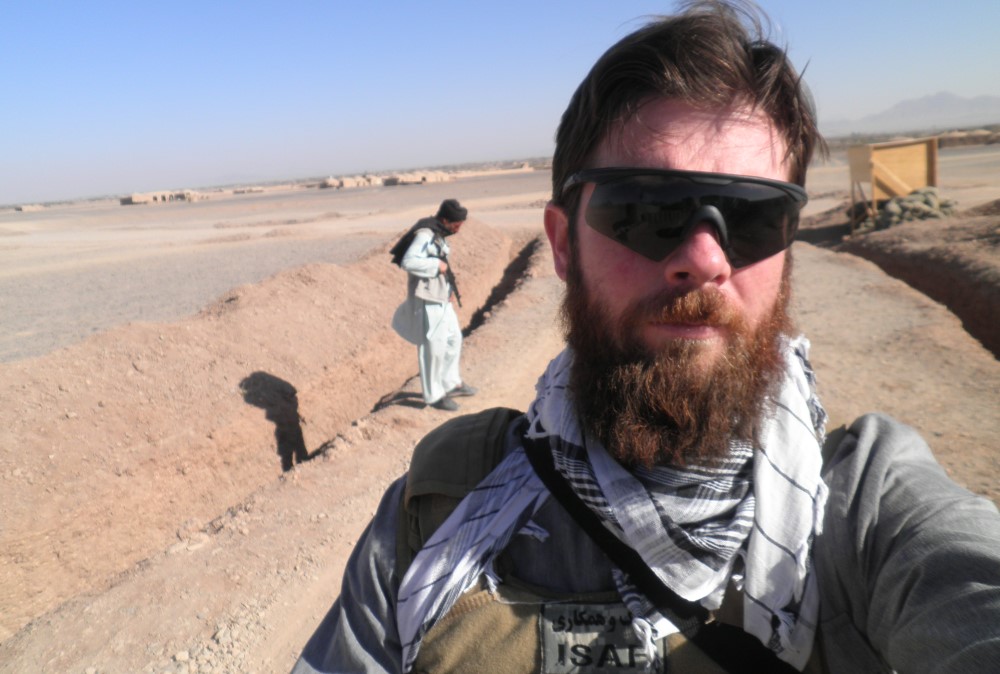 Joe Quinn takes a self-portrait during his time in Afghanistan. (Courtesy of Joe Quinn)

Q. What logistics lessons and strategic views from the Army did you find most applicable once you went into business?

A. I would say there’s two separate things when you think of business. When you’re in big Army — when you become a PowerPoint ranger, when you’re a captain or a major in a staff job — you do get training on the emotional intelligence you need to be effective in sort of a staff role, and that could be useful if you transition to … bigger companies, like a Fortune 500 company. I chose a different path, and I definitely think my time overseas lent itself to myself and other veterans being successful in an entrepreneurial environment.

When you’re … just 23 years old and you’re dropped in a village in Iraq and you don’t share the same language, there are problems, and no one’s handing you a book with solutions in them. You really have to think on your feet. And I think the street savviness of my youth, combined with that experience … of just trying to figure out problems, really lent itself to an entrepreneurial endeavor.

Being a veteran-owned and -operated Gold Star company with a majority — around 70% — of veteran [employees] means that even if we have a strategy for everything, we also know that even the perfect plan will never go perfect, and you have to be able to be flexible. I think bringing on operators from the military, … particularly within logistics, has been great. We’re working with an all-natural product with a 60-day sell-through window. And what’s needed is almost the precision of one big military operation.

Q. Beyond running and expanding the business, what are your most crucial initiatives?

A. First of all, I think what we’re doing is a mission unto itself. Our motto is to inspire families to eat natural food, one hot dog at a time. In 2015 we sold one hot dog, and in 2020 we sold about 5-6 million hot dogs, and that’s 5-6 million unique experiences where families are enjoying a natural product.

The second story of Feltman’s was born of my brother Mike and I losing our middle brother, Jimmy, in the World Trade Center, and thinking of all of the military veterans that have deployed or joined either before that day or because of that day and are still serving. So [we] want to connect with our customers and the different organizations and charities that support veterans. … So, to me, it’s just a win-win. We just always want to have that in our DNA: to give back.