Editor’s note: This article by Patricia Kime originally appeared on Military.com, a leading source of news for the military and veteran community. Learn more about identificiation cards here; starting in the summer of 2021, ID card offices will start issuing permanent, indefinite ID cards to eligible retirees and dependents at age 65.

Military retirees and family members renewing or getting their first military identification cards this year are nearly guaranteed to receive the Next Generation Uniform Services Identification, or USID, Card, the first update to Defense Department IDs for non-active duty beneficiaries in nearly 30 years. 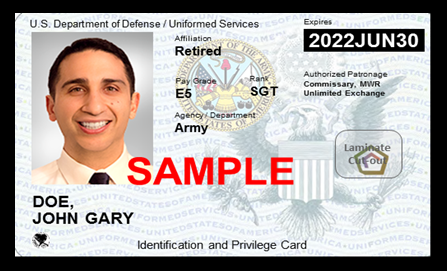 A look at the Next Generation Uniform Services Identification Card. (DoD image)

More than 200,000 new cards had been issued as of Feb. 28, according to data provided by the Pentagon.

The USID cards are more durable than the previous laminated cards since they are hard plastic and feature advanced security measures that make them less susceptible to counterfeiting and being used for fraud, according to defense officials.

The cards are being issued to new retirees and family members, as well as beneficiaries whose cards have expired. The transition to the new cards is expected to be completed by January 2026.

[RELATED: ID Cards and COVID-19: What You Need to Know]

As anyone with a military ID knows, the cards are necessary to access military bases easily, shop at commissaries and exchanges, and use on-base amenities.

In April, as a result of the COVID-19 pandemic, Pentagon officials announced that dependent and retiree cards that were to expire in 2020 had been extended automatically through September. This allowance has been extended again through June 2021 to help eliminate the need to visit a RAPIDS site in person.

Beneficiaries who have the current ID card should not seek a new card solely for the purpose of obtaining the new style, DoD officials said. The old style ID cards will remain valid through their expiration date, according to the Pentagon.