Editor's note: This article by Oriana Pawlyk originally appeared on Military.com, the premier resource for the military and veteran community. Learn more about Joe M. Jackson, a Life Member of MOAA, here and here.

The Congressional Medal of Honor Society announced Monday that Jackson had died in Washington state.

He received the military's highest award for gallantry and heroism for his actions rescuing three men in Vietnam.

"Lt Col Jackson risked his life attempting the rescue of a three-man USAF Combat Control Team from the camp at Kham Duc during Vietnam," Air Force Chief of Staff Gen. David Goldfein tweeted Monday. "His actions contribute to a legacy of valor & our heritage of service before self. My heart goes out to all those mourning his passing."

Jackson enlisted in the Army Air Corps in 1941 to be an aircraft mechanic. He quickly learned he could be of more service in the air as a pilot. He was selected for Aviation Cadet training, before pinning on his wings in 1943 to fly the P-40 Warhawk and the P-63 Kingcobra. Near the end of World War II, he became a gunnery instructor at Eglin Field, Florida.

He flew 107 missions as an F-84 Thunderjet pilot during the Korean War, receiving the Distinguished Flying Cross and the Air Medal with three Oak Leaf Clusters for his service.

The Newnan, Georgia, native became one of the first Air Force U-2 Dragon Lady pilots in 1956, supervising global reconnaissance missions. Then, in 1968, the 45-year-old Jackson headed to Vietnam as a C-123 Provider pilot with the 311th Air Commando Squadron.

In May 1968, Jackson, then a lieutenant colonel, was called in to rescue a three-man combat control team trapped under heavy enemy fire at a special forces camp in Kham Duc in South Vietnam.

For weeks, North Vietnamese and Viet Cong fighters has amassed around Kham Duc, prompting the U.S. to order an evacuation of more than 1,000 U.S. troops and allied civilians.

"I was supposed to fly a normal, routine cargo mission," Jackson recalled of the rescue operation in an interview.

Eight aircraft went in on the morning of May 12. All were taken out by hostile enemy fire.

"They were raking the camp with small arms, mortars, light and heavy automatic weapons and recoilless rifle fire," according to Jackson's official Medal of Honor award citation. "The camp was engulfed in flames, and ammunition dumps were continuously exploding and littering the runway with debris."

After what basically amounted to quick touch-and-gos to get as many people as possible on cargo aircraft, the three combat controllers were left behind in the confusion.

The airborne command post called for a follow-on air raid to destroy the deserted U.S. equipment.

A storm was brewing, with visibility deteriorating fast, Jackson recalled. He heard a radio call asking whether anyone nearby could go in and evacuate the remaining combat controllers before it was too late.

"I was looking out the window, and I knew exactly where they were," he said. "From 9,000 feet, I started an extremely steep landing approach. My airspeed was right at the maximum … the rate of descent hit the limit on my instruments."

He rolled out on the final approach roughly 1,000 feet from the end of the runway strip below. Another C-123 was already on the airstrip attempting to find the troops, but took heavy fire from both sides before quickly taking off.

Jackson touched down and saw the three men running toward his plane. Just then, Jackson's co-pilot called out that a 122 mm rocket had been fired at their aircraft. It skidded down the runway and broke in half, stopping just shy of the plane's nose.

"I'm the luckiest guy in the world," Jackson said.

The men boarded, and the C-123 got off the ground safely despite a heavy barrage of small-arms fire.

Not a single round pierced the airframe, Jackson said.

"There were two miracles there that day," he added. 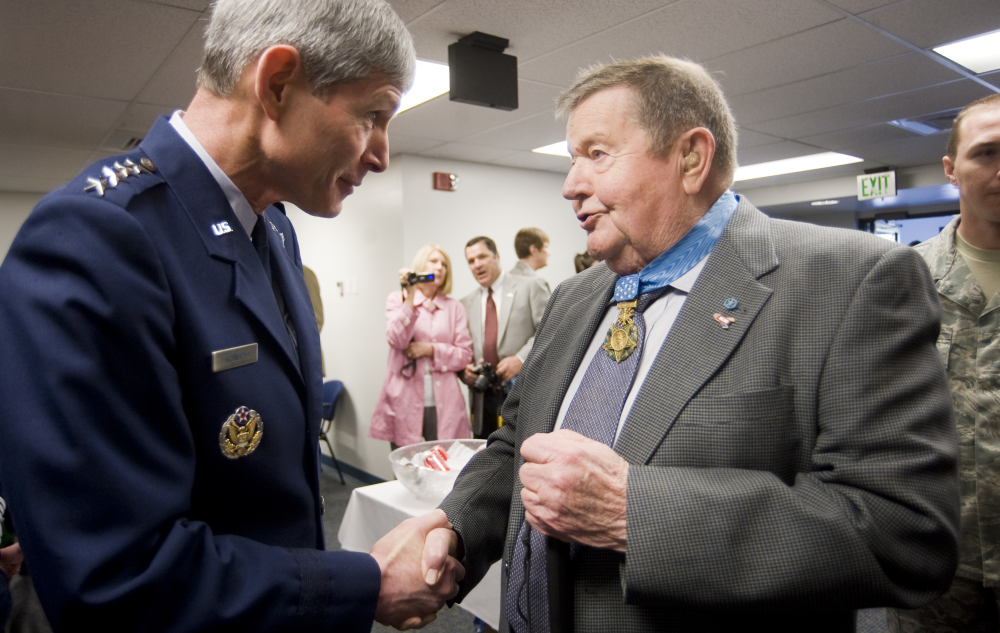 President Lyndon B. Johnson presented Jackson with the Medal of Honor during a White House ceremony on Jan. 16, 1969.

Jackson flew 298 combat sorties during the Vietnam War. He later became a faculty member at the Air War College in Montgomery, Alabama, until he retired from the Air Force in 1974. He then worked as a training instructor in Iran for Boeing until 1977.

His service and Medal of Honor -- which he once called a great responsibility to represent "the thousands of Americans who have served their country" -- shaped his worldview.

"It changes your life completely," he said about receiving the award in a 2013 interview with Air Force Times. "And just like your wedding day, you'll never forget it."

Jackson said he kept his award close, in his shirt drawer, adding that it made him reflect on his values not only as a service member but as a citizen.

"Regardless, you always do the right thing," he said.

Oriana Pawlyk can be reached at oriana.pawlyk@military.com. Follow her on Twitter at @Oriana0214. Other articles from Military.com: