As USS Decatur (DDG-73) conducted a freedom of navigation operation patrol in the South China Sea in late September 2018, a Chinese warship came within 45 yards of the U.S. destroyer, provoking a near-collision. The previous month, a Navy P-8A Poseidon maritime patrol aircraft flying in international airspace in the same area was warned by Chinese military personnel to leave immediately.

As U.S. servicemembers conducted missions defending the nation, back in Washington, the Food and Drug Administration (FDA) was investigating a probable cancer-causing chemical in a key ingredient made in China for a widely used medicine for high blood pressure and heart failure called valsartan.

People in 23 countries, including the U.S., had been taking the contaminated medicine. A change in the manufacturing process to boost profitability caused the contamination, which can inflict harm at very low levels. The product was recalled from the market.

For generations, Americans have taken for granted that warriors stationed around the world and citizens at home will have an unfettered supply of medicines that meet the highest standards. The incident with this widely used prescription drug revealed an unacknowledged threat: The U.S. has become dependent on China for medicines and the components to make them.

Photos show how close the Chinese ship came to the #USSDecatur before the U.S. ship pulled away to avoid a collision https://t.co/jhiTCldcZ6

In the past 25 years, there has been an exodus of drug manufacturing to China and other countries, especially for generics, which account for nearly 90 percent of prescriptions, and the chemical building blocks and raw materials to make them. Antibiotics are a big casualty of offshoring to China.

In the late 1980s, Tennessee's Oak Ridge National Laboratory had an emergency preparedness plan to ensure a continuous supply of antibiotics in case of an attack on the homeland. The plan contained addresses and contact information for every plant making antibiotics and meticulous instructions on how to repair and rebuild them.

In 2004, the last penicillin fermentation plant in the U.S. ceased operations. China had invested heavily in large-scale penicillin fermentation factories, and its domestic companies flooded the global market with products. They undercut U.S. and other western producers on price, driving them out of business. After China gained a stronghold in the U.S. and world market, its companies raised prices.

When the anthrax attacks occurred in September 2001, the U.S. government needed to buy 20 million doses of the antibiotic doxycycline, a treatment for anthrax exposure. It purchased the antibiotics from a European manufacturer who, in turn, obtained the active ingredient from a factory in China.

“If the enemy releases anthrax and they control the antidote, it would cause complete disruption to American society and to our national security,” says Brig. Gen. John Adams, USA (Ret), a MOAA Life Member and the author of a report on supply chain vulnerabilities in the defense industrial base.

America's dependence on China for antibiotics and other medicines has been steadily rising. If China shuts the door on exports, military and civilian hospitals would cease to function within months.

This dependence became evident when the FDA inspected a factory in China in 2015 that made multiple key ingredients for prescription drugs. Sixty-one complaints from commercial customers reported products lacked full-potency and contained impurities. FDA inspectors spent a week at the plant and ended up banning 29 products from the U.S. for serious breaches of standards. But because the FDA was so concerned about shortages of antibiotics and chemotherapies for cancer treatment, it exempted 14 products from its own ban.

Because of increased antibiotic resistance, superbugs are spreading. A last resort antibiotic for treating superbugs, vancomycin, sold by a prominent U.S.-based pharmaceutical firm, is made with a critical component from China. An FDA inspection of the Chinese manufacturing facility in 2016 revealed the quality control system could not produce accurate information to ensure the safety and effectiveness of the product it was making.

As the U.S. loses control over the supply of its medicines, it also loses control over price. In the aftermath of the recalled blood pressure medicine, prices more than doubled. Congress and the White House have no leverage over Chinese producers, especially when they are the dominant or sole source supplier. American consumers, the Defense Logistics Agency, and the VA are at their mercy. 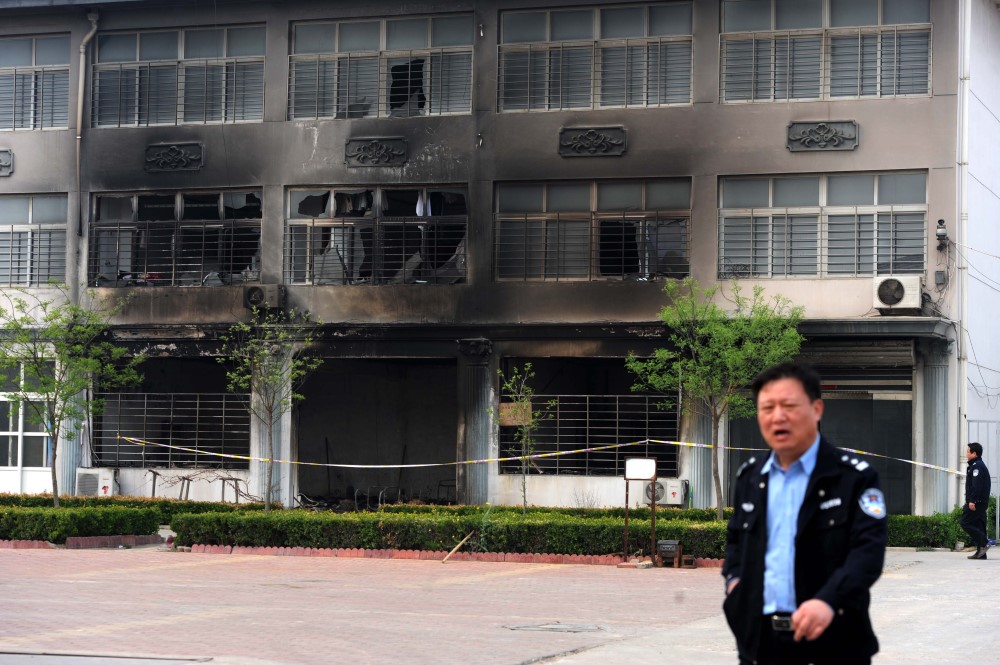 What's left of a burnt office at a Chinese factory in April 2012, after the owner allegedly set fire to his own plant to destroy evidence of making industrial gelatin. Workers were detained for making drug capsules using a toxic raw material produced from scrap leather, state media said. (Photo by STR/AFP/Getty Images)

A former FDA official compared agency inspections to child-rearing, using the example of telling your children to clean their room; the room won't stay clean unless kids internalize the importance of picking up after themselves.

Just a decade ago, the then-head of China's drug agency was executed for taking bribes from domestic companies. The absence of basic safety regulations and enforcement in China was on display when chemicals were improperly stored at a warehouse in the port city Tianjin. In August 2015, massive explosions occurred, and fireballs were detected by satellites in outer space. A toxic brew spewed across an 18-mile radius.

Four months later, the FDA found hydrogen cyanide, a chemical used in Nazi concentration camps, in a drug shipment to the U.S. from a company located in the affected area. The agency alerted U.S.-based companies buying pharmaceutical products from firms in the area that 40 different chemicals were discovered. The FDA urged them to make sure all shipments were free from contamination, a seemingly impossible task.

Profiteering and deception triggered the deliberate contamination of heparin, a widely-used blood thinner in U.S. hospitals. Enterprising minds used a cheap substitute instead of the authentic ingredient. The fake component so closely resembled the real ingredient that product testing did not detect it. The deaths of 246 Americans in 2007-2008 were associated with the lethal contaminant.

A Risk to National Security

China hasn't hesitated to leverage its dominant position in commodities, and its government has already threatened the U.S. with a drug shortage if the U.S. fails to agree to abide by its wishes.

Tensions in the South China Sea could escalate and block trade routes, cutting off supply. In a global public health crisis or Fukushima-type event in China, the Chinese government would keep more of the medicines it makes for its people. The U.S. would stand in line behind other countries to buy essential drugs for its citizens. During conflicts, medicines could be weaponized by withholding them or degrading their potency.  This would ultimately be as devastating as an adversary's military force.

Rosemary Gibson is the author of China Rx: Exposing the Risks of America's Dependence on China for Medicine (Prometheus Books, 2018). This is her first feature for Military Officer and MOAA.org. Email her here.

MOAA certainly is concerned regarding any issue associated with the safety of medications.  Our awareness was heightened several months ago when the blood pressure medication valsartan was recalled off the market by the Food and Drug Administration (FDA).  Our members called and voiced their worries too, especially since a probable cancer-causing chemical was identified to be in the active pharmaceutical ingredient and was traced back to the manufacturer in China.

As this issue gained traction, the spotlight was shown on the nation's increased reliance on generic medications manufactured outside the U.S. Unfortunately, this reliance includes the associated medication manufacturing processes and the ingredients, which are not under the strict scrutiny of the FDA.

While there are many macro forces impacting our national industrial base, the risks to the pharmaceutical sector should come under closer examination. In regards to the DoD and the VA, a start could be to ensure:

These overarching recommendations are consistent with the September 2018 Defense Industrial Base Report, “Assessing and Strengthening the Manufacturing and Defense Industrial Base and Supply Chain Resiliency of the United States,” which analyzed broad sectors where the U.S. is dependent on strategic competitors for military equipment/components.