Duke University is often a target of scorn, at least on the internet, but it is hard to deny they have had the premier men’s basketball program for decades. The biggest reason for their consistently high quality teams is their longtime coach, Mike Krzyzewski. 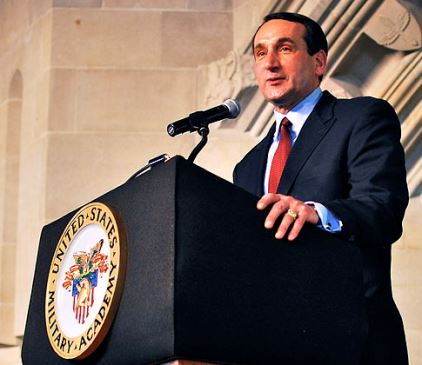 As of 2015, Coach K has racked up over a thousand career college wins, with five NCAA Tournament championships. He is also the coach of the U.S. international team, taking home gold medals in the 2008 and 2012 Summer Olympics. Krzyzewski’s long record of winning is reason enough to listen closely when he speaks. His past service in the military, including graduating from West Point and serving from 1969-1974 when he resigned with the rank of captain, lends a certain amount of gravitas to his words when he is speaking about the military.

However, in an unfortunate case of selective reporting and a disregard for clarifications issued by the coach, a viral email made the rounds shortly after Duke won the 2015 NCAA title:

The email links to an article on American Prosperity New Network (APNN) in April titled “Obama Stunned When Duke’s Basketball Coach Makes This Humiliating Accusation.” The article itself seems crafted to ride on the coattails of the 2015 Duke victory, even though the comments made occurred in 2014 and the coach issued a clarification when they were used in a political campaign right before Election Day. Although the title and the text in the body of the article are written in such a way as not to specifically state that the coach made the anti-administration comments directly after the tournament, the timing of the post and the web address certainly give that impression: http://americanprosperity.com/after-leading-duke-to-ncaa-championship-coach-k-leaves-obama-stunned-when-he-accused-him-of-this/

The topic in question is the reluctance of the President to commit ground troops to fight ISIS, and here is how the APNN characterizes the speech:

Coach K was set to receive an award at the Army awards conference when he decided he was going to use the podium to denounce how Obama has been leading our men and women in uniform.

He sympathized with our nation’s military leaders and acknowledged how frustrating it must be to have a commander in chief who isn’t willing to help keep our nation’s protectors safe by refusing to put boots on the ground to fight ISIS.

“I know it’s upsetting to many of you when you hear ‘no boots on the ground,’” Coach K said. “It upsets me too because that’s like saying I’m not going to play two of my best players.”

Taking a page out of his own book, he extrapolated how his time leading men’s basketball teams to outright victories parallels leading our military.

He articualted, [sic] “It’s about letting your opponent know that we are going to use our best players. Now whether you use them or not, that’s up to the coach. You never tell an opponent you are not going to use them.”

The origin of the comments made by Mike Krzyzewski come from an article in The Daily Beast on November 4, 2014 that covered an excellent speech Krzyzewski made when accepting an award from the Association of the United States Army in October 2014. You can read the article in its entirety here.

Overall, the APNN treatment of the speech was fair and correct, given the recorded words. What APNN did not do was give the proper temporal context of the statements. More importantly, it ignored the high-profile follow-up Coach K issued after the Daily Beast article attracted national attention.

On November 5, 2014, Krzyzewski gave an interview with the Charlotte Observer and attempted to clear the air about the controversy:

“I do not hate saying the other word because I love President Obama. It’s amazing that it happened three weeks ago and on Election Day something is brought up and said in a way that I didn’t say. So be it.”

Krzyzewski also expressed his pride at receiving the George Catlett Marshall Medal from the Association of the U.S. Army at the event. “That was as huge of an award as I’ve ever gotten,” he said.

“I wear it with pride, and I’ll always, always be passionate about our United States military, and I hope our entire country would always be that way — and I’m not running for anything.”

In the end, the viral email and the accompanying article on the American Prosperity News Network took a real speech with correctly reported language and presented them in a way that was not intended, disregarded the follow up by the coach and pushed it out to their email subscribers right after the spotlight of the NCAA tournament victory.

The speech itself and the debate over using ground forces to combat ISIS is a much bigger conversation, and Krzyzewski expressing doubts about the wisdom of the approach is akin to a friend giving honest, heartfelt, advice. It was not an attempt to humiliate anyone.

What is the most poignant takeaway from the Krzyzewski speech to the AUSA audience is this excellent passage of support and respect:

“In our country today, the most respected group is the United States Army. Please understand there’s power to that,” he said. “I want to thank you for the countless times your boots have been on the ground, and as a result has given me an opportunity to live in a free country, to do what I want to do, to coach the United States team, the Duke team, whatever. So on behalf of the ordinary people, we love you and thank you for doing that.”

Coach K is a great American, even if Duke is the team that America loves to hate.