This past March, two former military snipers sat silently in subfreezing temperatures, observing a petting zoo and fur farm in Lakeville, Minn., with a singular mission: to watch whether the facility's owner removed any wolves from the property.

The veterans' employer, Lockwood Animal Rescue Center (LARC) of Frazier Park, Calif., was going to inventory the animals later in the week, and they wanted to be sure the facility complied with a court order to provide access to the canines.

LARC hopes the wolves eventually will join 34 others at its rescue facility in Ventura County for Warriors & Wolves, a unique work-therapy program that puts veterans with post-traumatic stress (PTS) in charge of the animals' care.

According to Dr. Lorin Lindner, a LARC cofounder and licensed clinical psychologist, the veterans find strength in the work.

“They feel like they are making a difference, saving an endangered species. But they also feel like they have the wolves' backs, and in return, the wolves make them feel special. It's a wonderful partnership,” Lindner says.

Dogs have long been credited for helping reduce anxiety and stress in veterans with PTS, and preliminary results from a study released in February by Purdue University support the idea that human-dog relationships can be therapeutic.

But dogs aren't the only animals helping veterans heal from traumatic experiences. Across the country, former servicemembers are finding peace while caring for - or in some cases, just being around - parrots, honeybees, horses, farm animals, sharks, and more.

“It's very simple: [Prescription] dog. Or other animal,” says Dr. Eric Altschuler, a physician who wrote about the subject in the January issue of Military Medicine. Caring for an animal “forces a veteran to get outside themselves. They have to walk that dog. Feed that dog. Care for that dog. Your [combat] buddies might be gone, and you might feel guilt or horror from it, but you have to continue living. An animal gives you that reason.”

In 2004, former Army Pfc. Adam Ingrao needed a reason to get up every day. He had entered the service the year before, intending to make it a career. But a devastating training accident left him severely injured, throwing his life into a spiral, he says.

“It was a really rough transition. I was in a cast and ended up having to live with my parents,” Ingrao says.

He found, however, that working in his parents' garden helped him overcome his feelings of anxiety and the guilt of not being with his battle buddies. It led him to a degree in agriculture, followed by a doctorate in agricultural entomology.

Now he runs an initiative at Michigan State University teaching beekeeping to veterans. “We started with five veterans on my farm, a nine-month intensive training where they learned every aspect of beekeeping. At the end, one of the spouses - the wife of a Navy SEAL - came up to me and said, 'I don't know where he would be without this program.' At that point, I thought we might be on to something,” Ingrao said.

The program, “Heroes to Hives,” has roots that date to World War I, when the federal government established a beekeeping program to help veterans earn a living and integrate back into society.

Today, veterans are drawn to the program for the same reasons as those World War I veterans: They want to connect with other veterans, learn a skill, supplement their income, and find peace of mind.

“A lot of aspects of beekeeping are very meditative,” Ingrao said. “When you are working beehives, if you are not thinking about what you are doing - if you are not in that space, not in the moment - you tend to get stung.”

There are many theories on why animals help humans recover from mental health conditions, and presence of mind is among them. But the research on how animals facilitate recovery and the effectiveness of that influence is scant. Maggie O'Haire, an assistant professor of human-animal interaction at Purdue University, has reviewed the existing body of scientific literature on the subject and found just 10 studies that met certain clinical standards, even though animals have been used to help socialize mental health patients since at least the late 1700s.

Anecdotal evidence suggests animals can help children with autism increase their social interaction, lessen aggression and agitation in dementia patients, and reduce depression, anxiety, and fear in veterans with PTS.

PTS patients report being around animals helps them relax, forces them to live in the moment, and evokes feelings of warmth and empathy.

“Results have been predominantly positive, showing short-term improvements in depression, PTSD symptoms, and anxiety,” O'Haire wrote in the journal Frontiers in Psychology. “Further research is needed to better understand the nature of outcomes for different types of trauma.”

Beckett Aguirre thought spending a day at a ranch would be a fun experience, but not much more. He planned to attend an equine-assisted therapy program to learn about it for his job as a veterans' transition specialist.

Instead, while participating in a program at the Horse Rhythm Foundation in Phoenix, the former Marine discovered he had issues he needed to face.

“I went into it taking an academic approach,” Aguirre says. “But when I got there, I realized I needed it. ... Horses won't come to you if you have a lot of anxiety. You have to reduce your anxiety levels before you can even start.”

Equine-assisted therapy requires patients to observe, groom, and interact with horses. It also involves therapist-assisted sessions designed to explore a patient's psyche. During one session,
Aguirre was told to label a few obstacles, either a cone or a barrel, in a riding ring with issues he needed to confront. Then he guided a 1,500-pound horse around the obstacles, requiring him to concentrate on his feelings and reduce his anxiety as he approached one.

“If you didn't work on your own anxiety, the horses won't do what you want them to,” Aguirre says. “Animals have an ability to sense foreboding or danger, so it's not a stretch that they can figure out your emotions. And seeing how they react to your emotions makes you really think about what you are feeling.”

A Farm as Halfway House

Animal therapy doesn't necessarily require a formal program with a trained facilitator. At Veteran Victory Farm in Fitzwilliam, Mass., homeless veterans, many with substance-use disorders, care for chickens, ducks, dogs, horses, and cats while growing fruits and vegetables to sell at market.

The program gives veterans a home and a place to stay sober. And because the farm is self-sufficient, it requires a level of commitment many haven't seen since leaving the service, explains
Stephen Bassett, the farm's program manager.

“There is a value in having a reason in getting out of bed every morning, with the animals especially. After a month or so on the farm, a veteran starts to take ownership of the animals,” says Bassett, a former Air Force C-130 Hercules crew chief and veterans' outreach specialist. “There is a connection that takes the veteran away from himself.”

Unstructured programs such as Veterans Victory Farm are referred to as “animal-assisted activities.” Over the course of her research, O'Haire found one study involving 21 participants that showed being responsible for farm animals reduced depression in the short-term. “Indeed, the simple presence of an animal has been related to increased instances of smiling and laughing among children, as well as positive social engagement among adults,” she wrote.

The evidence is lacking as to whether the positive effects are lasting. Yet those who run many of the programs remain unconcerned. At the Georgia Aquarium in Atlanta, veterans are allowed to swim in the facility's 6.3-million-gallon exhibit with four whale sharks, manta rays, and thousands of sea creatures. Wanda Rodriguez, the aquarium's program coordinator for dive immersion, says the half-hour experience has a profound effect on servicemembers with physical or mental injuries.

“A lot of people have said it gives them a place to go to in their mind, a memory in their mind where they can go to when they start feeling stressed,”
Rodriguez says. “They say it's the first time since their injury they have felt a sense of peace.”

During the Veterans Immersion Program, participants bond with other former servicemembers and work with a certified therapeutic recreation specialist and a team of certified dive masters. Injured veterans - even those who are completely paralyzed - are supported by instructors trained to help handicapped divers.

Rodriguez says she believes the program helps injured veterans by providing an experience that evokes love and puts a person at ease.

“Unless you have experienced something, if you've never seen a whale shark or swum with a whale shark, you may not have much of a desire to save these animals. Once you've done that … you start loving them,” she says.

O'Haire cautioned animal-assisted interventions should be used in conjunction with traditional therapies, at least until researchers can better understand the outcomes and establish treatment protocols. 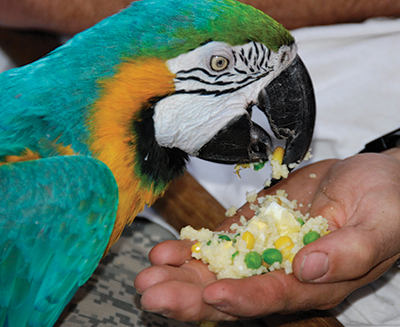 From Parrots to Wolves

Lindner agrees with O'Haire's assessment. Her work with animals began when she was facilitating group therapy at the West Los Angeles VA Medical Center (West LA VAMC). Veterans refused to participate at first. But when she added some rescued parrots to the mix, they began to talk.

“They would just sit there with their arms and legs crossed,” Lindner remembers. “But I brought some veterans to my bird sanctuary, and next thing I knew, I heard these guys talking to the birds.”

Navy veteran Matthew Simmons first met Lindner at her parrot aviary on the West LA VAMC campus, when he was a patient. Later, he started working at Lindner's bird sanctuary. The couple, who eventually married, bought a ranch in Ventura County and began rescuing wolf-dog hybrids. After seeing how the animals interacted with traumatized troops, they launched Warriors & Wolves.

Lindner says the bond between veterans and the animals is powerful, with veterans learning to care and trust the canines while the wolves, in turn, teach the veterans about pack dynamics and family.

Simmons calls it a lifesaving relationship.

“Our program heals veterans who would otherwise probably die,” he told Mother Nature Network in March. “And the wolves get to live out their lives and maybe share it in a special way with another sentient being who's also suffered. It's magical and special.”