Ruth Vivian Gormley was born in Winside, Nebraska on July 23, 1924, the only child of Dr. Robert and Mrs. Ella Gormley. Her developmental and school years were spent during the Great Depression. Her family, however, never had to worry about having enough to eat because her father was the town’s dentist and he was often paid in chickens and produce. She graduated from Winside High School as salutatorian in that infamous year of 1941. Ruth went to Wayne State College, taking secretarial classes, where she met Bob Haas, a 1941 graduate of nearby Wayne High School. Following her coursework, she went to Denver, Colorado, to work for the U. S. government. There she roomed with three other “working girls” and enjoyed the excitement of the big city. Meanwhile, Bob was called up into the Army Air Corps so they continued their courtship by mail and in person after Bob was stationed at Lowry Air Field near Denver. They were married in January, 1945, and later Bob was to join a B-29 squadron. Ruth returned to her parent’s home in Winside where their first daughter, Suzanne, was born.

After the war was over, Ruth and Bob bought a little house in Denver and set up housekeeping while Bob took a job in the insurance field. In 1950, he was recalled into the Army and sent to Germany. Ruth and Suzanne soon joined him there and they all enjoyed traveling around Europe before their second daughter, Jeanette, was born. After returning to the U.S. in 1954, the family moved to various Army posts around the country. The most memorable tour was in Ft. Richardson, Alaska; right after it became a state where Ruth joined a curling team! By this time, Ruth and Bob had become avid bridge players and often joined other couples for long evenings of bridge. Ruth was even captain of the Officer’s Wives Bridge club in 1961.

The family moved to Alexandria, Virginia, in 1965, when Bob was assigned to the Surgeon General’s office in D.C. After moving to Alexandria, Ruth’s career as a volunteer really blossomed. She became involved with Meals on Wheels and the local office of the Department of the Visually Impaired. For a number of years, she was chauffer to a blind Braille instructor, who became a valued family friend. She also worked for TDDY, the system of telephone communication used by persons with a hearing impairment. She also found time to do office work at their church and she became a regular Thursday retailer at the Eldercrafters shop in Old Town. She continued playing bridge and was an active member of several groups. Ruth was a very giving and gracious woman. A friend of her daughter, Jeanette, once described her as a “class act”. Anyone who was her friend found her to be very loyal, and as she had friends all over the country, she was also a very dependable letter writer.

After Bob retired from the Army in 1974, they took many trips and cruises. Hawaii, Greece, Europe, Canada, and the Caribbean were among their favorite destinations. After each trip, Ruth always put together a photo album with each picture described in her pretty handwriting. 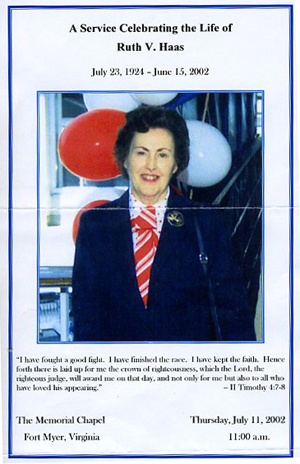