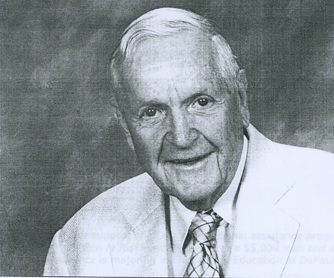 Captain DeLong had extensive careers in both the military and civilian life. He prepared for these by attending high school in Arkansas and Oakland, California, and college at Arkansas Polytechnic College and Union University, Jackson, Tennessee. He took his naval officers training at Northwestern University and on the battleship, USS New York. He was commissioned in June 1941. Later that year, he was involved with the installation of anti-submarine nets in the San Francisco Harbor. He served in the Caribbean and the South Atlantic and then, after Lighter than Air (LTA) (blimp) training at Lakehurst, New Jersey, he served with various LTA squadrons in Florida, Georgia and in Rio de Janeiro, Brazil. At the end of WWII, he was assistant district director of the Naval Reserve, organizing and administering Naval Reserve programs in Arkansas and Missouri. He completed his active duty tour as Executive Officer, Naval Air Station Argentina, Newfoundland. After completing his active duty naval career in 1953, he worked with the Parke Davis Company in various sales and sales management positions for over 42 years, retiring as a sales executive from Warner Lambert Pharmaceuticals.

In 2000, Captain DeLong and the DeLong – Sweet Family Foundation established a Designated Scholarship with the Military Officers Association of America Scholarship Fund