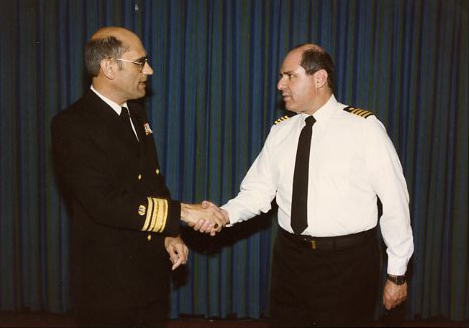 Born in New York, New York, James Anthony Freyer, the only child of Ralph and Helene Freyer, was a true child of the city. His parents were educators. His mother, to whom he was devoted, was a teacher, and his father, who would die while Jim was in college, was a principal.

Jim graduated from New York’s Eastchester High School in 1958 and entered Swarthmore College in Pennsylvania in the fall of that year. His astounding capacity for learning languages made the study of Latin and Greek a perfect fit for the college student.

A natural polyglot, Jim was conversant in French, Latin, Greek, Hebrew, and Spanish, taught himself to read and write Kanji during a tour of duty in Japan, and at the time of his death, was working on mastering Arabic.

His command of the English language was courtly and beautiful. He spoke and wrote an educated version of English, fast disappearing from the speech of Americans. His prose was marked by lucidity, his speech by precision and an underlying sense of fun. He was quick to correct mispronunciations of words, always in an instructive manner, never critically, while Henry Higgins-like he despaired of the constant misuse of words like lay, lie, laid, and lain that he heard.

A true student of the liberal arts, Jim had a love of the Classics and a passion for logic and rhetoric. The study of Law was an obvious choice for a young man who delighted in the intricacy and art of making a good argument.

While in college, he was the membership chairman for a social fraternity, Phi Sigma Kappa, and graduated from Swarthmore in June of 1962, earning a Bachelor of Arts degree.

He then attended the University of Pennsylvania’s Law School, where he was a member of the James Wilson Law Club. He graduated in 1965 with an LL.B. Following his graduation from law school, Jim made a modified European grand tour with visits to England, Ireland, Holland, France, Italy, West Germany, and Switzerland.

His final preparation for his career as an attorney was a two -year course of study at N.Y.U. School of Law in New York City. There he received an LL.M.

There is no need to say that Jim’s academic record was distinguished in all of his formal education. Anyone who knew Jim for any period of time discovered that he was quite possibly the brightest person he or she would ever have the pleasure of meeting.

Jim’s motto as a young person was, “Obstacles are what you see when you take your eyes off your goal.” He followed that motto all his life.

Although not a natural athlete, he was a dogged one. As a student, he played tennis and threw the discus. Later, in the Navy, he ran—not because he loved it but because it was necessary to pass the physical fitness tests and maintain an appropriate weight.

He produced an odd sort of shuffling gait, head thrust forward, as he headed out in all weather, turning out his required miles with characteristic discipline. He continued to run until a herniated disc, experienced while on active duty at Naval Training Center Great Lakes, made running an uncomfortable experience - which he finally dispensed with altogether, substituting instead a lumbering, rolling sort of walking gait for exercise.

Although it is hard to imagine it, (based on Jim’s later aversion to insects, heat, and the great outdoors in general) as a young adult, he worked as a camp counselor for a series of summer camps. Handsome and personable, he was on staff at Camp Alamar in New York, Camp Wildwood in Maine, and Camp Walt Whitman in New Hampshire.

Coming of age when the draft was still in place, Jim served as a Navy enlisted man for just over a year. He learned the skills of a yeoman and spent two weeks active duty for training aboard the USS Coates (DE-685), his only brush with sea duty over his long military career. He attained the rank of Yeoman 3rd class.

Brilliance and independence of thought marked his 26 years of service as a member of the Judge Advocate General Corps. He served his country with distinction as a general attorney for 17 years, as an appellate military judge for more than 3 years, and as a General Courts Martial Military Judge for 5 years.

Jim retired from the Navy in 1995. After careful consideration of the tax codes of various states, he became, he pronounced with obvious satisfaction, a resident of the state of Nevada, the most tax friendly state in the country.

Over the next 12 years he would migrate back and forth between homes in California and Nevada until he bought his final residence in Boulder City.

In retirement, Jim cared for his mother until her death, continued to monitor his investments, dabbled in the market, and considered, briefly, going into private practice. He took, and passed on his first attempt, the difficult California Bar Exam and was admitted to the Bar, attending conventions and continuing education courses but never choosing to practice. Instead, he used his legal training to assist his local condominium organization as a member of its board and to give general information to his neighbors about the requirements of the law on various topics.

He was fascinated by electronics, computers and, oddly enough, television programs like Pride Fighting. He simply could not imagine how people could do such things and watched the matches with a sense of delicious distaste.

He was an avid photographer and loved to share his photos with his friends. Witty in conversation, he wrote wonderful e-mails and could always find something of interest to him in every person he met.

He was very concerned about the safety of people he knew who were still on active duty and involved in the Iraq conflict or who were serving in nearby countries as Department of Defense employees.

Jim loved the law; he was happy in his life; he knew he had friends and he enjoyed them. He was an intensely private person who allowed certain people to see certain facets of his personality. He impressed everyone who knew him with the genuine decency and honor that were the hallmarks of his character. The sparkle in his eyes, the tilt of his chin was infectious. When he left your home, headed to the next place, you always found yourself wondering when he would be back again, hoping that it wouldn’t be too far in the future.

Theocritus wrote, “Precious are all things that come from friends.” No matter where we come from, or how we knew him, we are all better people because of the interest he took in each of us. If one as brilliant as he believed in us, we could surely believe in ourselves. Jim’s gift of lasting, unequivocal friendship is the precious thing which we all share. Rest in peace, dear friend.