Eight of ten members of Maryland's congressional delegation attended the Maryland Council of Chapters' Congressional Appreciation Luncheon on Wednesday, Sept. 26, in Washington, D.C., their remarks testifying to the effectiveness of local chapter advocacy efforts and revealing their legislative priorities for the military community.

“It's a great privilege to hear the stories of veterans and think about the things I can do as a legislator to help [you],” Rep. John Delaney (D-Md.) told the assembled group of Maryland chapter members. “Most of the legislation I've done related to veterans came from stories I heard from them. We need to know the things that matter to you and the people you represent.”

Rep. John Sarbanes (D-Md.) implored chapter members to continue advocating for servicemembers and veterans. “[Advocacy] is more important now than it's ever been because there are more fiscal constraints,” Sarbanes said. “Policy these days tends to get made on the fly; things can drop in and out of the bill during the process. That's why the advocacy you bring is so important.”

Sarbanes detailed military issues of particular concern to him, including protection for servicemembers from predatory lenders. 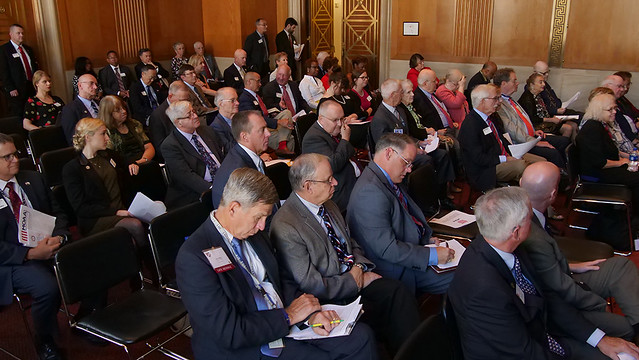 “I was disappointed the head of the Consumer Protection Bureau said they'd no longer proactively look for ways to protect our servicemembers against predatory lending practices,” he said. He also acknowledged his dedication to fixing the Survivor Benefit Plan/Dependency and Indemnity Compensation offset, also known as the widows tax, and focusing on disability pay.

The widows tax was just one of the issues Rep. Andy Harris (R-Md.), a veteran of the Navy Reserve, vowed to work on: He also identified Chapter 61 retirees and the necessity of ensuring the fitness of those who enter military service by offering competitive recruiting packages.

“We need to make the determination,” Harris said. “Which is more important: a force we know is mentally and physically capable, or hitting a number?”

Multiple representatives discussed the importance of funding a strong military, especially in light of national security threats. “We need to stand strong, and it's the men and women of our military who are standing there,” said Rep. Ben Cardin (D-Md.).

“We have to make sure we work and put in the money for the future and future weapons that Russia and China are also developing,” he said, while calling for veterans to get the medical care they deserve, fair disability compensation, benefits reflective of honorable service, and a responsive VA.

“Russia impacted our elections,” said Rep. Steny Hoyer, minority whip. “That's a threat to our basic democracy. But if we invest directly in cybersecurity, we can compete with anyone in the world.”

“We made it a priority to mass the VA and military construction appropriations signed into law by the president a few days ago,” he said.

More funding victories were shared by Rep. Jamie Raskin (D-Md.), a former professor of law at American University: a $10 million increase in funding for the Peer-Reviewed Cancer Research Program within the U.S. Army Medical Research and Materiel Command and $10 million to the Defense POW/MIA Accounting Agency to help identify remains from the Korean conflict.