President Donald Trump honored several servicemembers during his first State of the Union address while calling on Congress to end deep spending cuts that have wreaked havoc on defense budgets.

Trump touted economic growth, tax cuts, and the need for immigration reform in what he called a “new American moment” during his roughly 90-minute speech. The U.S. must be ready to confront threats from countries like Russia, China, and North Korea, Trump added, at the same time it fights to defeat terror organizations like the Islamic State group.

“As we rebuild America's strength and confidence at home, we are also restoring our strength and standing abroad,” Trump said. “… Together, we are building a safe, strong, and proud America.”

Here's a look at 10 military moments from last night's speech.

1. Ending defense spending cuts. Trump said rivals like China and Russia are challenging the U.S. economy, interests, and values. In confronting those dangers, Trump said weakness “is the surest path to conflict and unmatched power is the surest means of our defense.”

“For this reason,” Trump said, “I am asking the Congress to end the dangerous defense sequester and fully fund our great military.”

MOAA has pushed for an end to threat of across-the-board spending cuts known as sequestration. Read more about that here.

2. Extending accountability beyond the VA. Trump celebrated several recent reforms to VA care in his speech, including giving veterans more choice about where and when they get their medical care and the ability for department leaders to fire poor-performing employees.

Now, Trump said, he wants to extend that same level of accountability to other parts of the government.

“All Americans deserve accountability and respect,” he said. “… Tonight, I call on the Congress to empower every cabinet secretary with the authority to reward good workers - and to remove federal employees who undermine the public trust or fail the American people.”

“As part of our defense, we must modernize and rebuild our nuclear arsenal - hopefully never having to use it, but making it so strong and powerful that it will deter any acts of aggression,” Trump said.

Someday, there might be a “magical moment” when countries around the world agree to eliminate their nuclear weapons, Trump added. “Unfortunately, we are not there yet, sadly,” he said.

4. The war on ISIS. The military has made great strides in the fight against ISIS, Trump said, helping local troops take back large swaths of land the terror group once controlled. The fight will continue until ISIS is defeated, he said.

“I am proud to report that the coalition to defeat ISIS has liberated almost 100 percent of the territory once held by these killers in Iraq, Syria, and other locations as well,” Trump said. “But there is much more work to be done.”

5. Recognizing valor. One of the servicemembers on the front lines of the ISIS fight is Army Staff Sgt. Justin Peck, whom Trump invited to attend the State of the Union. Peck earned the Bronze Star with combat “V” device for helping save a comrade during a 2017 deployment to Raqqa, Syria.

“Justin and his comrade, Chief Petty Officer Kenton Stacy, were on a mission to clear buildings that ISIS had rigged with explosives so that civilians could return to that city, hopefully soon and hopefully safely,” Trump said.

They were in a hospital laden with explosives, and Stacy was severely wounded while clearing the second floor. With disregard for his own safety, Peck raced to Stacy's aid, applying pressure to his wound and inserting a tube to reopen an airway. He performed lifesaving aid for 20 minutes as Stacy was transported to safety, Trump said, and maintained artificial respiration through two-and-a-half hours and through emergency surgery.

“Kenton Stacy would have died if not for Justin's selfless love for his fellow warrior,” the commander in chief said. “Tonight, Kenton is recovering in Texas, Raqqa is liberated, and Justin is wearing his new Bronze Star, with a 'V' for valor.

“Staff Sergeant Peck: All of America salutes you,” Trump said.

6. Reassessing Gitmo. In order to win the war on terror, Trump argued the U.S. must be able to detain and question what he called unlawful enemy combatants. Terrorists who bomb civilian hospitals are evil, he said, and when they're captured, they “should be treated like the terrorists they are.”

“In the past, we have foolishly released hundreds of dangerous terrorists, only to meet them again on the battlefield - including the ISIS leader, Abu Bakr al-Baghdadi,” Trump said.

7. Changing rules of engagement. Another important piece in the war on terror, Trump has argued since campaigning, is the need to allow military leaders more authority to make battlefield decisions and for those decisions not to be made public.

Some servicemembers have lamented the Obama administration set rules of engagement that constricted them, and didn't allow them to fight back when needed.

“Our warriors in Afghanistan … have new rules of engagement,” Trump said. “Along with their heroic Afghan partners, our military is no longer undermined by artificial timelines, and we no longer tell our enemies our plans.”

8. Bravery at home. Trump also recognized contributions servicemembers are making at home. Coast Guard Aviation Electronics Technician Ashlee Leppert, who was also in the audience Tuesday night, was one of the first servicemembers to respond to people in distress when Hurricane Harvey made landfall last summer. 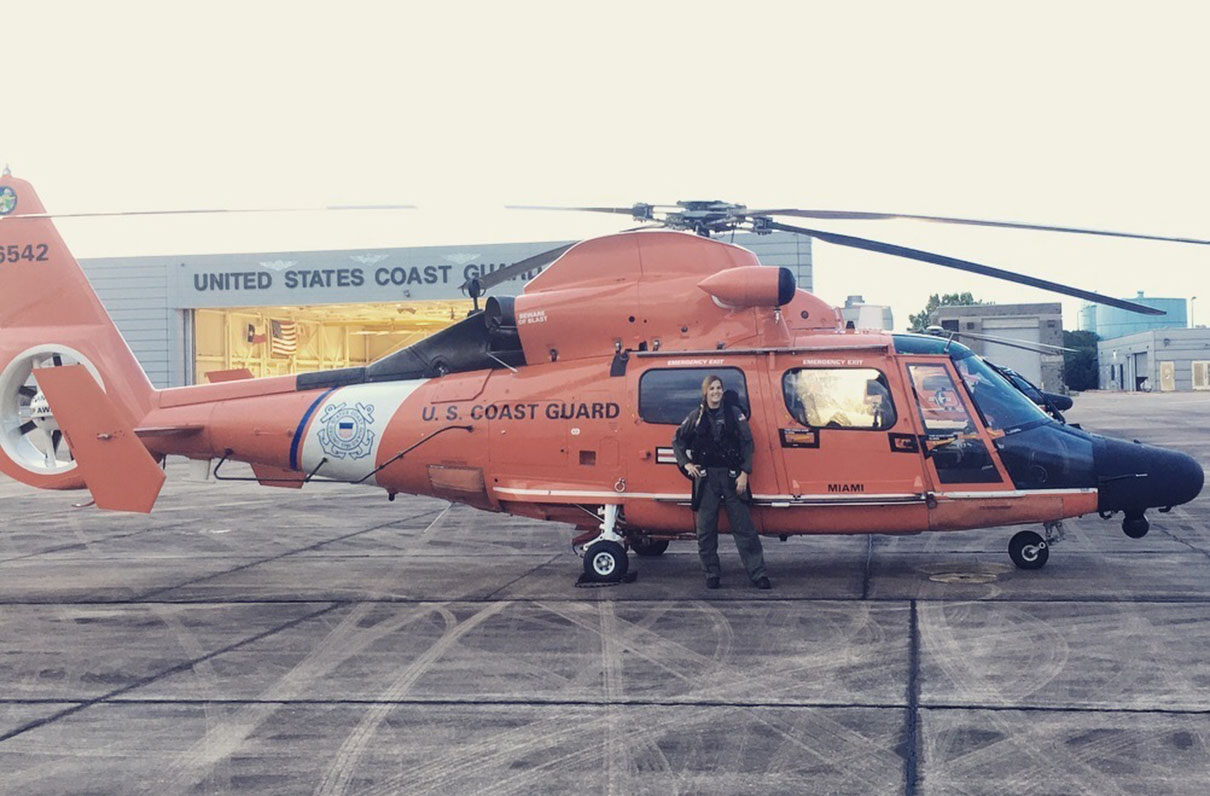 “Through 18 hours of wind and rain, Ashlee braved live power lines and deep water to help save more than 40 lives,” Trump said. “Thank you, Ashlee.”

9. Honoring service. Also in attendance was Preston Sharp, a 12-year-old boy who has placed more than 40,000 U.S. flags on veterans' graves. Sharp was visiting the grave of his grandfather, a Navy veteran, in Redding, Calif., on Veterans Day in 2015. He noticed some veterans' graves didn't have flags placed by them to honor their service. 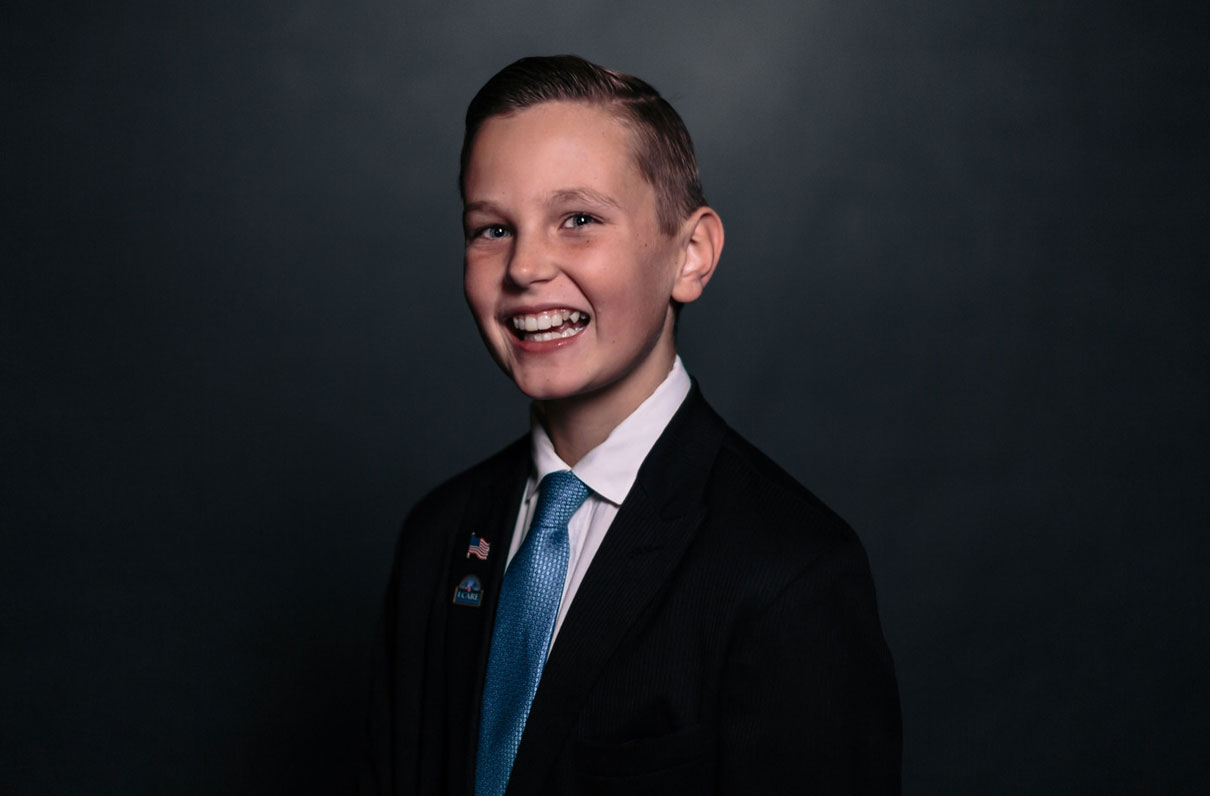 Preston Sharp was visiting his veteran grandfather's grave in 2015 when he noticed other veterans weren't being honored with American flags or flowers. (White House photo)

Sharp, then 10 years old, decided to change that. He launched an effort called Flags and Flowers for Vets, which calls on Americans to honor veterans every day - not just on holidays.

“Young patriots like Preston teach all of us about our civic duty as Americans,” Trump said. “I met Preston a little while ago and he is something special, let me tell you. Great future.”

10. Celebrating a wounded warrior. Though Trump didn't mention him in his speech, the president also invited medically retired Marine Cpl. Matthew Bradford to attend the State of the Union address. 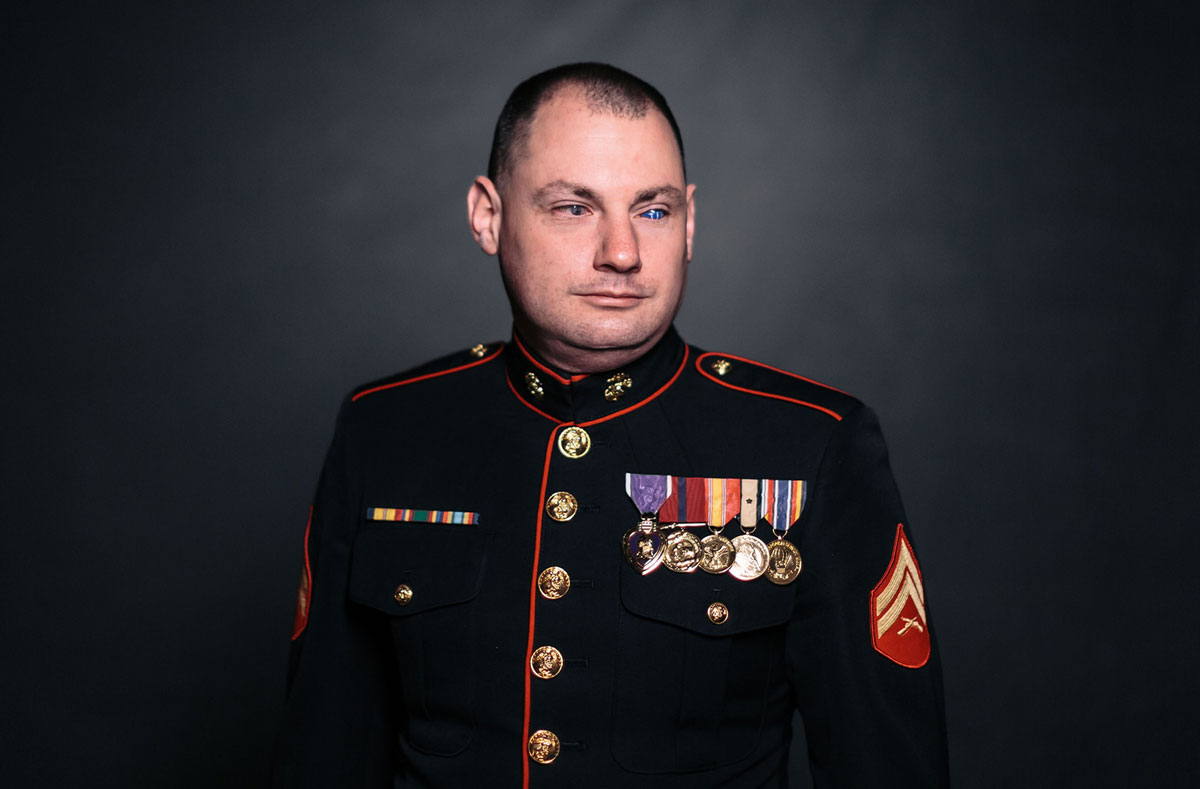 In 2007, now-retired Cpl. Matthew Bradford stepped on an IED in Iraq. He lost both legs and was blinded, but later re-enlisted. (White House photo)

Bradford was severely wounded by an improvised explosive device blast during a 2007 deployment to Iraq. He lost his eyesight and both legs, but still was determined to serve. Bradford became the first blind double-amputee allowed to reenlist in the Marine Corps.

Now retired, Bradford recently graduated from the University of Kentucky.