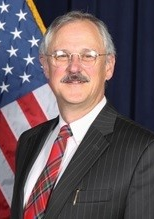 Marcus J. Beauregard assumed the duties of director for the Defense State Liaison Office within the Office of the Deputy Assistant Secretary of Defense for Military Community and Family Policy in November 2015. As director, Mr. Beauregard is responsible for an office of eight regional liaisons, a senior liaison who oversees their operations and a senior state policy analyst. Together, they conduct strategic planning, legislative analysis, outreach and education in order to assist governors, state legislators and other state officials in addressing the department’s priority issues affecting service members and their families.

The Defense State Liaison Office is responsible for assisting in the passage of an average of 70 state bills per year, influencing a range of titles in state statutes including absentee voting, occupational licensing, unemployment compensation, consumer protection, family law, child advocacy, K-16 education, public health and National Guard support. The Defense State Liaison Office consults annually with staffs working for the Under Secretary of Defense for Personnel and Readiness, military departments, National Guard Bureau and the joint staff to develop potential state issues to ensure state policymakers consider issues that are timely and important.

Prior to appointment as the director of the Defense State Liaison Office, Mr. Beauregard worked on the team as a contractor and a civil servant beginning with the inception of the office in 2004. Before that, Mr. Beauregard served with Military Community and Family Policy starting while on active duty in the Air Force. His initial position, beginning in 1999, was that of deputy director of personnel support and education in 1999 and then, in 2000, the director of Morale, Welfare and Recreation policy.

Following his 27 years on active duty and retirement from the Air Force in 2003, Mr. Beauregard continued to support Military Community and Family Policy as a contractor, managing the Department of Defense Financial Readiness Campaign through 2006. In addition to his responsibilities within the Defense State Liaison Office, he also oversaw research, analysis and rulemaking for the Military Lending Act from 2006 through 2016.

Mr. Beauregard is a 1975 graduate of Virginia Tech with a Bachelor of Fine Arts and a 1991 graduate of Webster University with a Master of Arts in human resources development.